In addition to a mosque’s evident religious function, the structure carries a big cultural and social responsibility. Mosques are places of daily gatherings for prayers, religious teachings, and charity work, housing numerous visitors throughout the day. Based on the social value and the flexibility that the mosque has, FAA tried to reconnect the important social organization with the city and people’s daily life, making sure their design complements the dynamics of the city.

Situated within a 22500 sqm land area, the mosque will acquire 4500 sqm of the space. The architecture firm developed a contemporary design with hints of the past, reminding people of historic mosques in Iran but with an approach that complements the city’s modernism. The Shabistan part of the roof was elevated, mimicking a traditional mosque’s dome and inviting visitors towards the building. Different passages cut through the structure, creating visible conjunctions between the mosque, a nearby university, the city, and their surroundings. Pedestrian walkways located on the eastern and western sides of the mosque gradually deviate towards the Qibla wall, creating small contemplation spaces and "pauses" between the parallel passages. 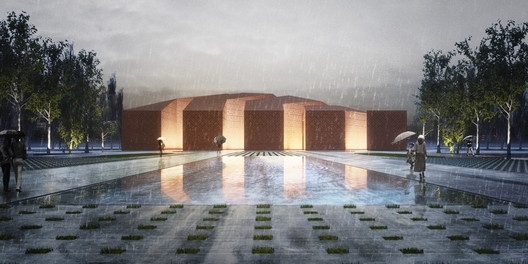