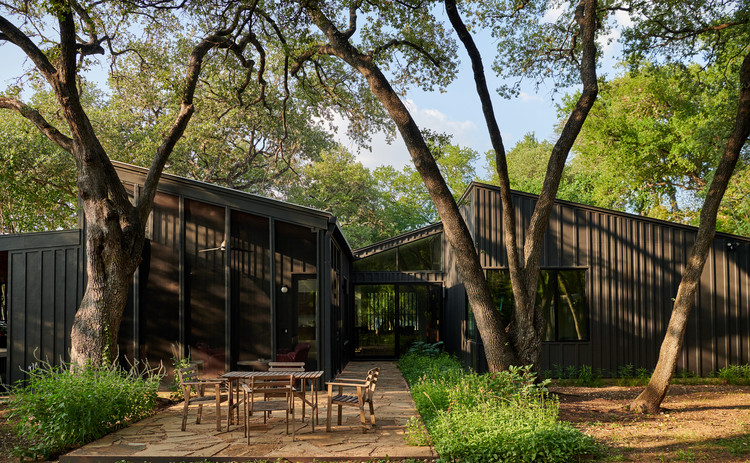 Text description provided by the architects. This new 2500sf house, designed by architectural practice Thoughtbarn, is nestled within a grove of heritage live oak trees on a 3/4 acre lot in the Barton Hills neighborhood of Austin, TX. The wooded, hilly neighborhood was subdivided in the fifties and is populated with ranch-style houses clad in rugged limestone veneers. The clients wanted to build a house that respected the mid-century character of the neighborhood, while pursuing a bold and contemporary approach to design. The outcome is a project which creates strong and often surprising connections between indoors and out, with an angular roof form and black vertical siding that simultaneously camouflage and contrast the house with its leafy natural surroundings.

Originally conceived as a renovation project, the footprint closely mirrors the idiosyncratic H-shaped plan of the original house, which 'grandfathered in' certain areas of the trees' critical root zones, permitting them to be built over.  The new plan creates a clear logic with a 'public' wing (containing kitchen, dining, media room and screened porch), with a 'private' wing (of bedrooms and bathrooms).  The living room bridges between the two, opening to an interior courtyard that brings light into the center of the house.  A  distinctive 'zig-zag' roofline creates a butterfly roof over the living and dining areas and a ribbon of clerestory windows with views up into the canopies of the live oak trees.

The exterior is clad in a common fiber-cement 'board and batten' siding.  Painted black, with the battens multiplied in a dense, vertical pattern, the siding takes on a more unusual, artful qualities, intentionally rendering the house as an abstraction of the 'forest'.  In overcast light, the house almost disappears among the tree trunks.  The front porch inset and carport soffit are clad in a stained pine, which provides a warm counterpoint to the starkness of the black exterior.

On the interior, the client's distinctive tastes are reflected in an eclectic palette of custom walnut cabinetry, navy blue paint accents and splashes of richly patterned tile and wallpaper, enhanced by a furniture and art collection that combines family heirlooms with mid-century gems and colorful textiles. Buried at the center of the house is a bathroom unexpectedly bathed in natural light from a skylight overhead.  The light cascading down the white, textured tile creates the feeling of an 'inner sanctum', a retreat from the exuberant embrace of the outdoors across the rest of the house.

The house happily fills with people for afternoon barbecues and late-night parties, but is also at its best as a serene retreat, a place to relax and connect with nature, while maintaining all the conveniences of its urban neighborhood location.