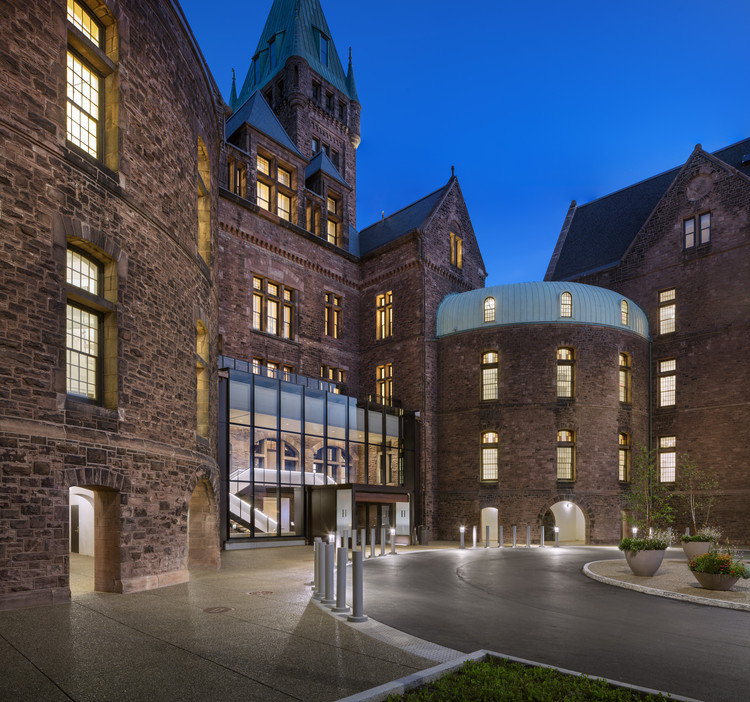 Text description provided by the architects. Deborah Berke Partners has transformed the central portion of the National Historic Landmark Richardson Olmsted Campus into the Hotel Henry, a boutique hotel that celebrates the history and architecture of the monumental structure designed by the Henry Hobson Richardson. The project brings new life to a long-abandoned architectural masterpiece, originally designed as the Buffalo Asylum for the Insane, adding to the revitalization of the city and reinforcing Buffalo as center of great American design.

A new glass and steel entrance acts as a beacon and establishes a new connection to the landscape and a discreet parking area. At night, the new addition glows like a lantern, while the illuminated towers give the building a heightened presence from a distance. The new entry pavilion uses a light and highly transparent architectural language that is clearly contemporary in contrast with Richardson’s masonry building.

Inside, the scale and grandeur of Richardson’s design is preserved, while discreet additions and subtractions transform the building for new uses. The lobby includes a food service marketplace and moveable furniture for flexible configurations and a restored grand staircase. The 191,000-square-foot project includes 88 hotel rooms, conference facilities, a fine dining restaurant, and a grab-and-go café. Small former patient rooms were combined to create modern guestrooms, and the wide, light-filled hallways were preserved. In the hallways, cabinet-like bump outs were added to accommodate bathrooms for the guest quarters, while custom carpets with an abstract pattern and cool gray and green colors evoke the Olmstedian landscape.

Alcoves in the guest rooms double as dressing areas with moveable desks. Furniture throughout the guestrooms is spare and low, emphasizing the scale and character of the architecture. Above the headboards, custom acoustic panels are painted with images of Richardson’s designs. Art by Buffalo-based artists add local character to the spaces. On the top floor, large loft-like suites with high sloped ceilings are tucked under partially exposed beams, which reveal internal structure of the building. 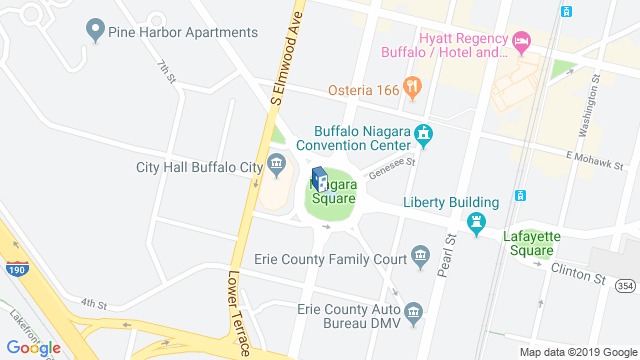 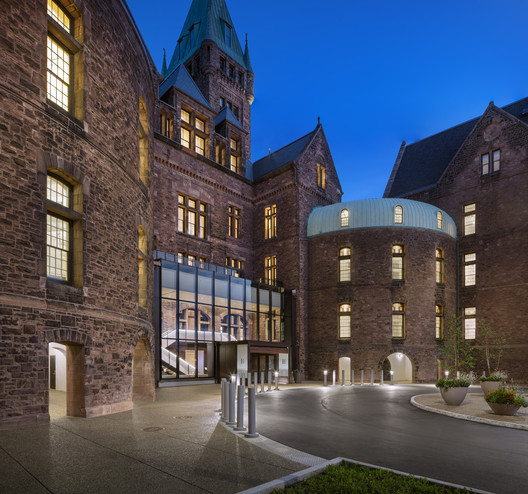