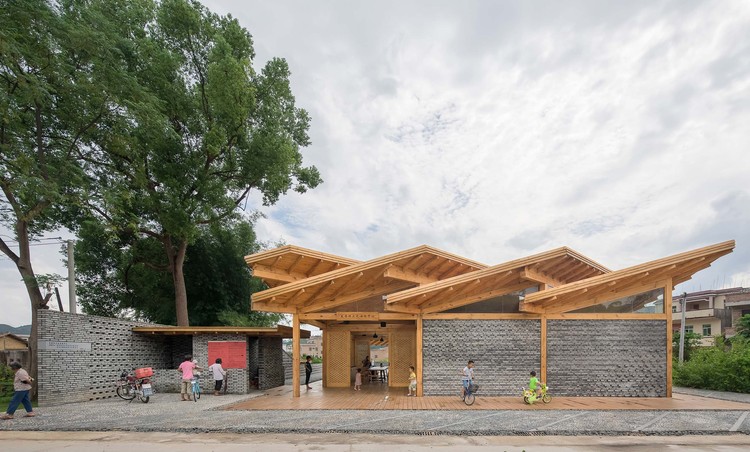 Fachang Village, Heyuan
The Dongjiang River flows through Heyuan city from north to south, and the Xinfeng River circles the city from west to east. The two rivers meet in the east of Heyuan city, making the whole city surrounded by water on three sides, hence the name Heyuan. This is a hakka area in Guangdong. Located in the northeast of Zijin County, Heyuan, Fachang village is probably best known for the brief stay of Sun yat-sen’s people in the early years. For this reason, Zhongshan memorial primary school was built, which is one of the few public buildings in the village (another is the ancestral hall). Most of the village’s young people are now migrant workers in the city, leaving behind mostly the elderly and children who have become the main users of the new community center.

Community Center
Layout
The plot of land is almost trapezoidal, surrounded by cottages and farmland, and is divided into north and south part by rural road. There is a small river to the southwest of the site, on the south side of the river are the half-moon pond and the ancestral temple. The northwest side of the site is visually open to the mountain. The rural road on the east side is an important road to enter the site. Between the rural road and the site is a strip of green space with two old trees and a row of bamboo. Further east is the Zhongshan memorial primary school. We took the two parts of the plot as a whole, close its south and east side with brick masonry wall, make it open toward the north-west mountain, forming a clear site definition. The brick wall and concrete cobblestone pavement on the northeast side of the rural road enclose a half-moon square, which is considered to be used for multi-functional activities, such as open-air cinema.

Space
The main building is placed on an elevated wooden floor in the center of the trapezoidal land on the southwest. Considering that it is mainly used by the elderly and children, the wooden floor is seamlessly connected to the outdoor space. Public toilet is placed on the northeast side in combination with the enclosing wall outside the main building. The main body of the community center is an orthogonal frame of 4Mx4M column network, with 3 meter high space for use. The 1.5 meter triangular inclined roof is supported above 3 meter. Uniform and stable light enters the room from the north-facing high side window to form a comfortable indoor light environment.

At the lower part of the triangle, 200mmx200mm “U” shaped steel groove is set as the roof drainage facility. The roof overhangs 1.5 meter, forming an open cornice space of the outer corridor. A span of overhead space on the northeast is formed to become the main entrance. Large overhanging eaves on the west and south form a space transition with outdoor courtyards. The southern cornice is kept as low as possible to frame the nearby bamboo and distant hills. The eaves space on the southeast side forms a long and narrow enclosure with the low wall. Through the hollow low wall, the reserved plants on the southeast side infiltrate into the courtyard to form a view borrowing. The interior space can be divided flexibly to adapt to the uncertainty of its future uses.

Material
The nature of the landscape in the village leads us to adopt a construction mode that is different from that in the city. Natural material (wood and brick as the main material) is used to intervene in the renovation of the site in a “natural” way to create a warm shelter for the leftover elderly and children. The main body of the building is a timber frame system, with southern pine as the main material. In order to reduce the difficulty of construction, we regulate the size of beam and column section, unified as 200mmx200mm, and the connection between the rods is mortise and tenon joint. Most of the outer wall are glass frame doors supplemented by wood twill filling, except for the outer wall of the first floor facing north rural road, which is filled with partially protruding blue brick masonry. The ground is built with plain concrete masonry inclined lattice (in the same direction as the building roof skylight) filled with dark cobblestones, which are bonded with cement. 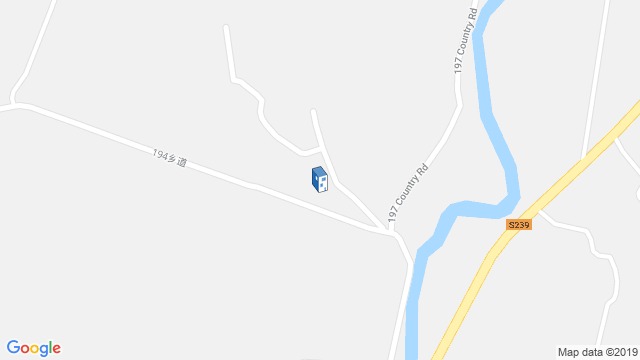 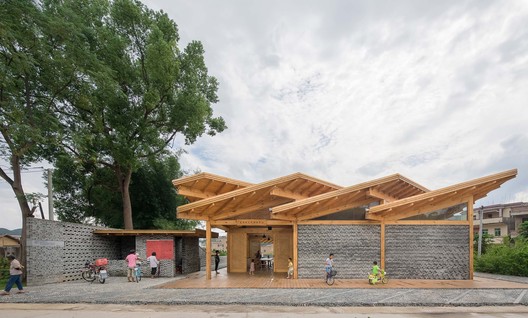