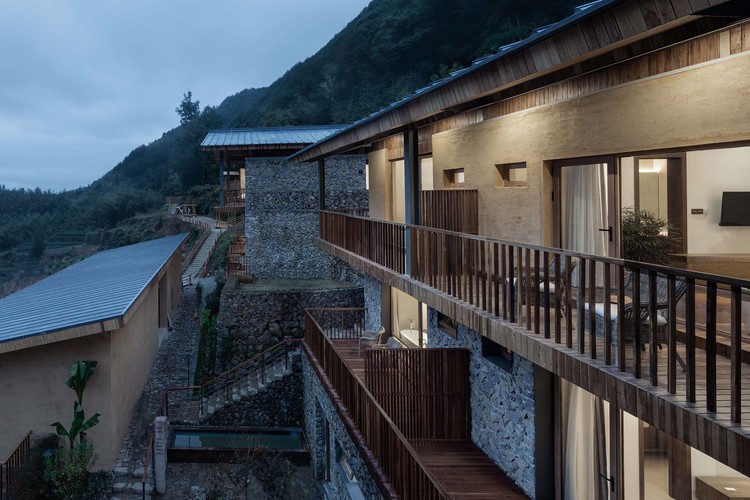 Song Yang · The Last Mysterious Place in Jiangnan
The poet Shen Hui in the Northern Song Dynasty once described Songyang in his poem The First Visit to Songyang like this:“This is the only Peach Blossom Garden, the unique scenery of which can’t be seen anywhere else”. Thousands of years later, more than 100 ancient villages with complete and clear configuration are still hidden in the misty“Peach Blossom Garden”and it is praised by National Geographic as“The Last Mysterious Place in the South of the Yangtze River”.

Songyang Original Cottage is the second design practice of line+ in Songyang after the practice of Stray Bird Art Hotel. The project is located in Langshu Village, Sidu Town, Songyang, Lishui, Zhejiang. The overall site is high in the north and low in the south. The height difference within the red line is nearly 40 to 50 meters. It is a typical mountain settlement with“90% of mountainous areas, 5% of streams and rivers, and 5% of arable land”. The original land parcel is in step morphology. The rammed earth old houses have nearly collapsed or have been demolished, with only a few towering ancient tress witnessing the vicissitude of the village.

Nature and Man-made
Langshu Village, as is seen by us, is filled with mountain forests and cloud sea, terraces and cottages, rammed earth and grey tiles, presenting unique beauty of Chinese countryside without redundant decorating. However, the hundred-years old houses in mountains that bear the authentic lives of mountain people, are destroyed or abandoned in the constructing and developing process as the living style and values of villagers are changing. According to the records, there are nearly 300 natural villages were submerged in the urbanizing process every day from 2000 to 2010. 0.9 million of the villages vanished in 10 years. Apart from providing urban visitors with places for temporary resting, the project, which has a site selection here, also shoulders the responsibility of reviving Langshu Village, and pins the hope and thinking on the relationship between the human and nature as well as the relationship between the human and man-made environment.

Faced with nature and tradition, the designing tenet derives from revering and respecting the current situation of original site as well as the dependence and restoration on original life styles. The best music is always silent and profound; The greatest state is always not to seek for wonderful patterns, and the smartest is always the modest. By developing with nature conditions, following the traditional patterns of natural villages, and pursuing the sense of beauty without designing, the design can actualize the strategies of adhering to traditions, recovering texture, and activating the villages.

Methods and Strategies
For this reason, the team repeatedly went to the site for surveying and mapping, the accurate positioning of ancient trees and ancient roads and marking the original elevation of platforms with various heights. The final design layout is the answer most suitable for the land parcel after trying numerous possibilities so as to uphold the principle of minimum destruction of nature.

Typology is used by the design to modularize three functional spaces: public area, centralized guestroom and single-family Villa. It avoids ancient tress and places all functional modules. Depending on the original terrain, the modules are placed on the original elevation of platforms as much as possible. The public area is stacked on top of each other, and the guestrooms are divided into parts to dissolve the sense of volume of buildings. Then according to the differences in contour trend, landscape and visual field, it fine-tunes the height and angle to maximize the landscape experience while ensuring privacy.

Thirty-three rooms, equipped with reception lobby, book reading, dining room kitchen, constant temperature swimming pool public area, the building area of 2688, for a mountain lodging is undoubtedly a huge volume. Designed with one or two floors of guest rooms scattered uniformly between the mountains, four floors of public areas in the form of patches of terrain extension, weakening the volume, while creating a series of viewing terraces. The top and bottom of each floor of the buildings are connected with the mountains of different heights, and the buildings are spread out layer by layer, resembling growing out of mountains, being attached to the mountains in the gentlest way and appearing indistinctly in the landscape.

The steps made of rubble masonry ascend upward. The ingenious moving line design allows the line of sight of visitors to weave between the distant mountains and back mountains. By climbing slopes, looking up, turning around and viewing at a distance, visitors can enjoy the fun of mountain tour that when sceneries vary with changing view-points and the winding path leads to a secluded quiet place. The buildings are located in a mountainous area and face valleys, lying on a precious land with hidden trees. The beautiful scenery of the distant mountains can be seen and the century-old ancient camphor trees are adjacent to each other. Through different windows, at different times and at different building heights, visitors can find different sceneries and have different experiences at each level. Outside each window is an entire frameless picture scroll of mountains and plains.

Material and Construction
The big suspension board of public area is poured integrally by wooden formwork concrete. Architects hope to reinforce the space purity by conducting meticulous treatments on structure and equipment. The interlayer wall with 200 (concrete load-bearing wall) +80 (insulated rock wool) +120 (concrete ornamental wall) is used to meet the insulating standard. To cover conduits and air-conditioning outlets without setting dropped ceiling, equipment cavities with the clear width of 600-1000 are designed for concealing air-conditioners and other equipment in places where spatial effect will not be influenced.

Guestrooms adopt the architectural form of pitched roof and mainly use local rubbles and rammed earth to continue the traditional lives and context. There is neither architectural space with grand narration nor costly and complicated ways of handling materials over here. The organic integration of materials and forms, the rammed earth, heaping stones, small grey tiles of every mountain cottage are the architectural materials, and the façade modeling, what is more, the mountain life.

Poetry and Dwelling
This is a local homestay and is also a home for you to come to mountains from cities. You can slow down your foot steps and see a ray of dawn. It is surrounded by ancient trees and green mountains everywhere. You can lie on your back watching clouds scud across the sky. On the terraced fields are not only the simply-scattered large and small local homestay, but also the layout containing traditional settlement texture. The traditional culture of Langshu Village is rooted in the living container of this land, providing a way of homestay that integrates local culture and modern civilization.

Songyang Original Cottage starts from the brand-new homestay mode and rural ecological community and belongs to a natural village that has heterogeneous and isomorphic village texture and is built according to the situation. The architects respond to nature in a modest attitude with oldness and newness, primitiveness and artificiality, exquisiteness and simplicity, masculinity and feminity and seek for the beauty of balance and appropriateness. Line+ never stops its exploration on“natural”architecture through its works. 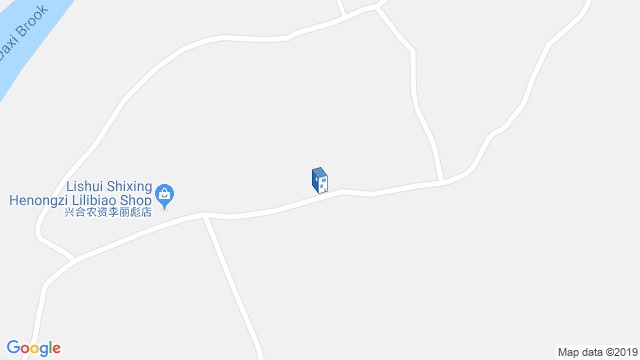 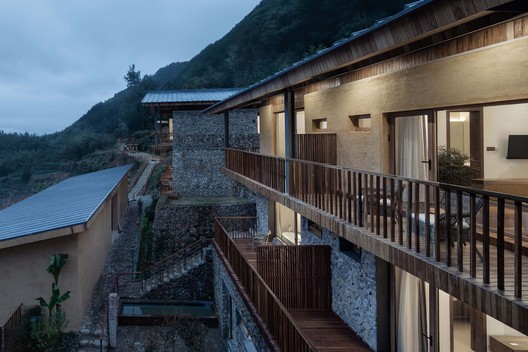