Save
DnA Designs a Music Studio by the Sea in Qinhuangdao, China
Share
Or
Copy

DnA has released images of its Music Studio By The Sea project, situated in Hebei Province, China. The studio building for a music foundation stands directly next to a long sandy beach, with a dune landscape in the background. On a square ground floor plan, the volumes ascend over three stories and conclude with a roof terrace.

Located 300 kilometers east of Beijing, the city of Qinhuangdao is an established tourist and summer resort for the country. The 676-square-meter music studio, accommodating record rooms, terraces, and various stages, conceptually breaks a circular amphitheater into four segments and rearranges them on different levels.

On the lowest level, one half of the amphitheater is orientated towards the water with its seating steps integrated into the building structure. One quarter-segment serves as stands on the terrace and one eighth-segment of the amphitheater each links the first with the second and third stories as steps.

Having undergone a design stage from 2015 to 2018, the scheme is currently under construction for client Aranya. 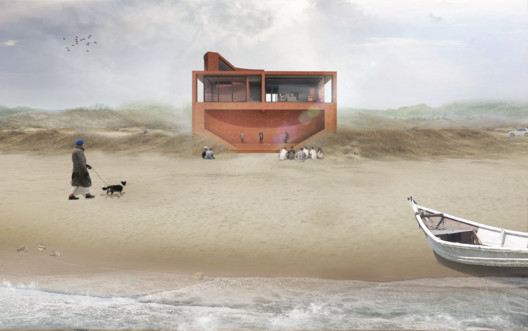