Text description provided by the architects. House AO is based within a context where landscape is one of the core conditioning factors for its design. The client requested that the main spaces take part of the best views; the architectonic response was to propose spatiality where the user, the architecture, and the setting would dialogue.

The lot finds itself on an elevated area bordering the city of Otavalo. The preponderating views are towards the east, gazing at the Imbabura volcano. This context marks the axis which organizes and builds the spatial scheme.

Found within the equatorial Andes, the site is very cold; this posed another important condition: to reduce incidence of the strong northern winds that flow throughout the year and the low temperatures without using electromechanical heating systems.

These conditions of the site marked the orientation of the house as a pivotal factor so that the main spaces would have the best views and at the same time allow the entry of the largest amount of sunlight, so to maintain a pleasant temperature during the whole day.

The volumetric proposal contemplates two parallel volumes placed over a plinth of stone, and rotated over the lot so that they are aligned with both the rising sun and the peak of the Imbabura. This rotation also allows for the northern winds to hit against the building and preclude the pass of dust and cold into the house. Two perpendicular axes cross the volumes connecting the different spaces: service, social, and private. The first axis marks the entrance, and it turns into the main circulation path of the house; it works as a gallery to go over the interior spaces of the house from south to north.

To enhance the social area, which according to the client had to be the main space, a five meter height living room was placed at the center of the house with absolute transparency towards the exteriors. To the east of the living room an exterior social area with a central fire-pit, a bench, and lush vegetation complements the area. Towards the west, a closed barbecue area acts as a link with the exterior and functions as an element to expand the social area; the transparency of this space allows a direct view of the Imbabura.

Location of the kitchen and master bedroom at the eastern extremes of both volumes is born as a requirement to link them with the main view. We raised the roofs at the extremes as an architectonic strategy to capture the most of the morning sun. More so, this gesture manifests reverence towards the astounding Imbabura.

Materials such as stone, brick, and roof-tile pretend to root the architecture to its context and maintain harmony with the surrounding houses. The big glassed walls allow for a fluid relation of the interior space with the context, as well as to receive abundant sunlight in the interior. The exposed steel structure and the white walls conjugate harmoniously in the duality of the contemporary and traditional architectonic languages. 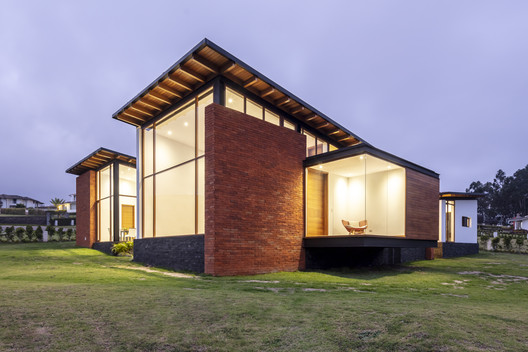 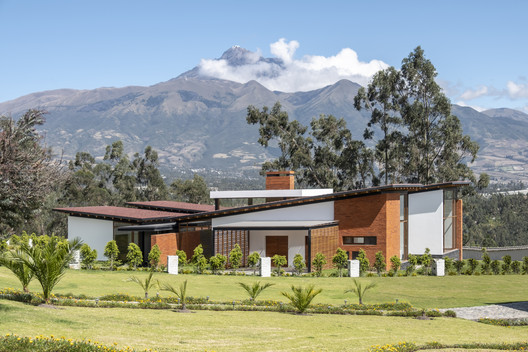