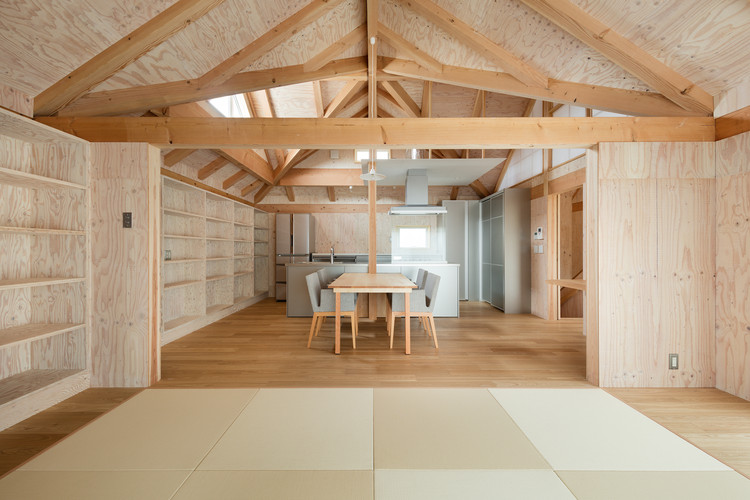 Text description provided by the architects. The site is in a community in Toyama with houses and shops sprawling in a relatively relaxed manner. There is a playground in the neighboring area on the southeastern side, and the Tateyama mountain range can be seen beyond that. We placed an L-shape volume like the chumon-zukuri (a traditional L-shaped style house) inside the trapezoidal-shaped site and arranged a child room and garage that can be used as a future shop facing a front road on the west side.

Considering the snowfall, taking the distance to the north side neighbor, as well as setting the center of living space on the second floor on the southeastern park side, enable the house to be open to the park side while securing privacy.

Because this area has heavy rainfall and snowfall, we made two orthogonal gable ridge penetrate to divide the roof so that the flow of rain and snow is dispersed; the gable will be the element of environmental control to incorporate light and wind. In order to create a reasonable wood structure in the snowy area, we reduced the number of components by constructing the thatched roof structure instead of the wagoya (a traditional post-and-lintel roof framing) and constructed a large space efficiently while reducing the bending stress given to the beam.

The part where the two buildings intersect becomes a three-dimensional truss, under which the center of living space is created. On the first floor, by setting the rise of the foundation of the outer peripheral part to waist height of approximately 1 meter, we reduced the stress of the column receiving the load of the upper floor and made it function as a wall to protect the house during snowfall.

As the houses before the early modern period adapted to the climate of the land and each building element were parametrically adjusted, we reconstructed the characteristic composition and custom of the house as a technical characteristic in the world today, rather than in a symbolic manner. 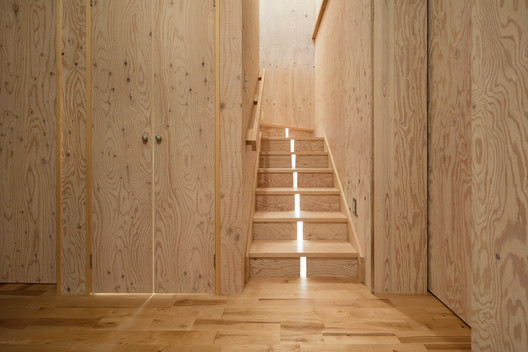 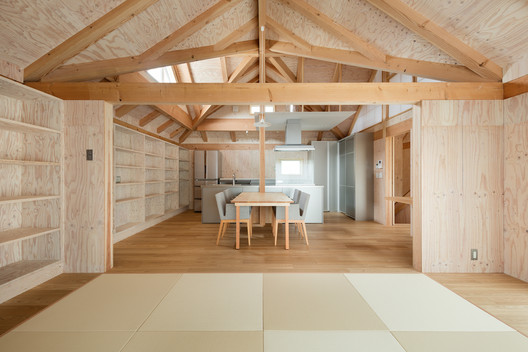