Save
Neil Denari on The High Line, Urban Design and Experimental Music
Share
Or
Copy

On this episode of The Midnight Charette podcast, Architect Neil Denari discusses his experimental music and shares his thoughts on urban design, teaching, living in New York City and Paris, the development and evolution of the High Line, and more.

Bio from www.denari.com. Neil Denari is principal of Neil M. Denari Architects / NMDA and a Professor in the Department of Architecture and Urban Design at UCLA. Among his many awards is the 2011 Los Angeles AIA Gold Medal. Denari’s work has been included in many exhibitions, including the traveling solo show “Displaced Buildings in Aperiodic City” which was inaugurated in 2017 by the T-Space Gallery in Rhinebeck, New York. His work is permanently held by eight major museums around the world. Denari has been a Visiting Professor at Harvard, Princeton, Columbia, Penn, and Rice among other schools. He is the author of Interrupted Projections (1996), Gyroscopic Horizons (1999), and MASS X (2018).

Listen to the interview on iTunes or Spotify.

This podcast episode is available on The Midnight Charette's website, YouTube, iTunes, Spotify, and all other podcast apps. 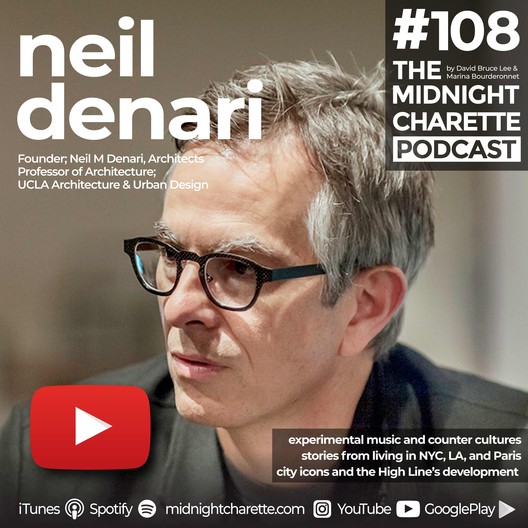