Architect Aleksandra Jaeschke has been named the winner of the Harvard Graduate School of Design’s 2019 Wheelwright Prize. Jaeschke receives a $100,000 traveling fellowship to fund her research proposal UNDER WRAPS: Architecture and Culture of Greenhouses. The fellowship and grant are designed to support investigative approaches to contemporary architecture, with an emphasis on travel-based research. 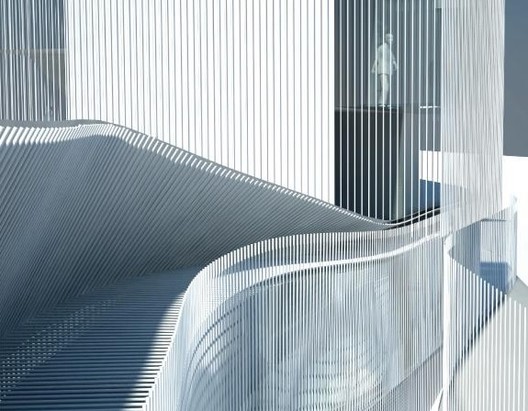 Jaeschke’s winning proposal, UNDER WRAPS: Architecture and Culture of Greenhouses, aims to explore the culture and architecture of greenhouses around the world, focusing on the interactions between plants and humans across a spectrum of contexts and cultures, as well as the spatiality of horticultural operations. Jaeschke was among three remarkable finalists selected from more than 145 applicants, hailing from 46 countries.

“With her pioneering work on greenhouses, Aleksandra Jaeschke reasserts that the field of architecture can and should continue to engage deeply with nature, with horticulture, and with ruralism and the countryside,” says Mohsen Mostafavi, Dean and Alexander and Wiley Professor of Design, Harvard GSD. “As we applaud Aleksandra and look forward to her project, I also want to take this opportunity to congratulate the other two finalists, Maria Shéhérazade Giudici and Garrett Ricciardi, for their outstanding proposals, which made the decision about this year’s award exceedingly challenging for the jury.”

A graduate of Harvard GSD (Doctor of Design, 2018) and the Architectural Association in London (AA Diploma, 2005), Jaeschke is an architect licensed in Italy and an Assistant Professor of Architecture and Sustainable Design at the University of Texas at Austin. She was one of the 2014 Kosciuszko Foundation Fellows and will be the Meadows Foundation Centennial Fellow, at the Center for American Architecture and Design at the University of Texas at Austin, from September 2019 to August 2021. She previously taught at Woodbury School of Architecture in Los Angeles.

Jaeschke’s interests range from mainstream discourses on sustainability and broader notions of ecology to cross-scalar integrative design strategies and the role of architects in transdisciplinary projects. Her Wheelwright proposal, UNDER WRAPS, stems from her fascination with the multifaceted nature of greenhouses and the very act of sharing a roof with plant life. Her goal is to investigate the impact of spatial arrangements and speculate about strategies for a more equitable “greenhouse ruralism” and an engaged “urban (horti)culture”—the former to empower farmers, and the latter to engage urban dwellers in the act of caring for plants, which she calls “our living substrate and the ultimate Other.”

Jaeschke’s intention is to spend extended periods of time in a number of regions with a high concentration of greenhouse agriculture and visit remarkable urban and rural greenhouses that are unique for their singular architecture, adaptive approach to technology, or extraordinary function. She will travel to the Netherlands, Spain, Israel, Morocco, Mexico, and South Korea, and will also visit significant sites in Canada, Malaysia, Taiwan, the United Kingdom, Switzerland, and Poland. Her goal is to catalog and compare various greenhouse types, from farm-hoop houses to botanical conservatories; operations, from farming to hospitality; and locations, along a rural-urban transect. Jaeschke also hopes to use her travels to launch collaborative projects.

Jaeschke previously practiced at AION, an architectural firm she co-founded and co-directed with Andrea Di Stefano. As part of AION, she managed numerous design workshops and contributed to various publications. She participated in the 27/37 Exhibition of Young Italian Architecture at the Italian Pavilion, Shanghai Expo 2010, and was part of the ARCHITEKTUR! conference series held at the MAXXI Museum in Rome in 2012. In 2013, AION held a solo exhibition, Eco-Machines, in the Wroclaw Museum of Architecture in Poland. In 2011, Jaeschke received the Europe 40 Under 40 Award conferred by the European Centre for Architecture, Art, Design & Urban Studies and Chicago Athenaeum.