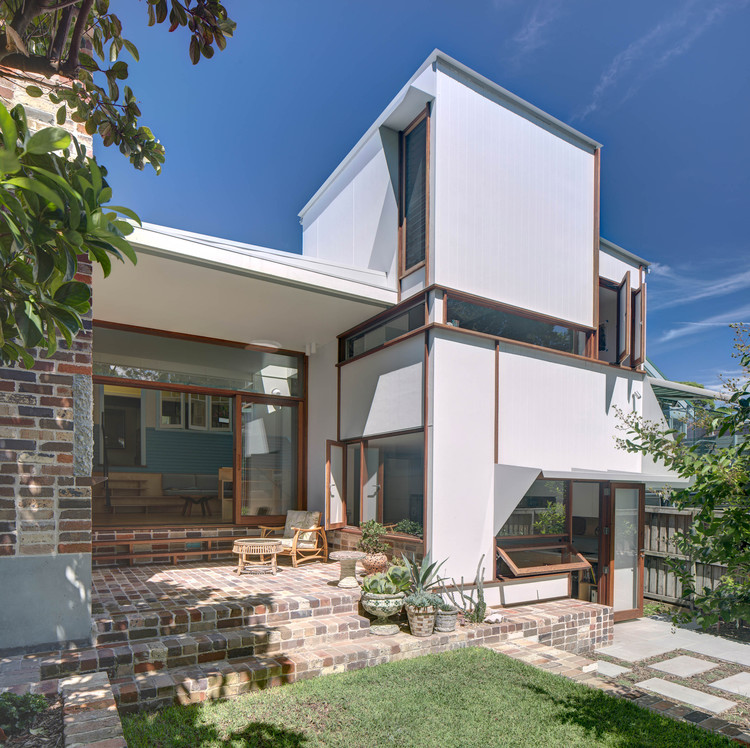 Text description provided by the architects. In Freshwater Art House we have curated a series of interlocking cubic volumes for living and for the making and displaying of art. Mezzanines and stepped floor levels spill down from the existing house into the garden and parkland beyond the site. Spaces are distilled with an idea that you could set up anywhere within the house and create. In response to the ubiquitous knockdown and project home rebuild in Sydney’s northern beaches, including several properties within this street, this project celebrates the existing, much loved c1928 timber bungalow by retaining it in its entirety. The rear rooms act as platforms to view and access the new work. The original external weatherboard and fiber cement façade become the interior of the new spaces.

The dado weatherboard cladding is extended into the new work by cladding a new stair, seamlessly integrating the old and the new. New work is joyously stitched with sensitivity to the 91-year-old building using complementary materials and details. With reverence to the existing layout, only one internal opening was formed, and one new internal wall was constructed necessary to reroute the circulation to the rear of the house. This preserves the integrity of the existing rooms, dedicated to sleeping and the bathroom. 2 new skylights add natural daylight to the entry and the rear sitting room. A new joinery unit partially separates the new hall from a library. The ceiling and above the picture rail within each room is painted in different polychromatic colors.

These were chosen from a nostalgic recollection of the colors painted on timber beachside cottages in the area. The bathroom mosaic floor and skirting tiles were handset by the owners and Kevin Liu from our office into 300x300mm custom 3D printed templates to allow for a 1mm grout joint to the 29x29mm vitrified tiles in 23 different colors. This is an example of the care, consideration and creative, collaborative process undertaken in this project. Stairs create a spiral circulation system connecting various levels and new spaces at the rear of the existing house. Plywood steps and bench seating extends from the old back door into the living room.

The living room extends to an elevated covered brick terrace and internally via stairs down to the kitchen and dining space set level with the garden. The kitchen connects to a laundry in the existing subfloor and back up to the existing house. A mezzanine gallery is a bridge to the art tower above the kitchen. The tall ceiling with high level eastern and northern windows allows daylight and cross ventilation along with a low set horizontal window looking into the terrace and over the garden and pool to the park. The terrace includes a sculptural brick and stucco render parrilla. Constructed from recycled bricks in a stack and running bonds and bricks cut in 2 types to form vertical fluted columns and projecting brick shelves. A single projecting brick is laid beside the arched parrilla for placing a drink while cooking.