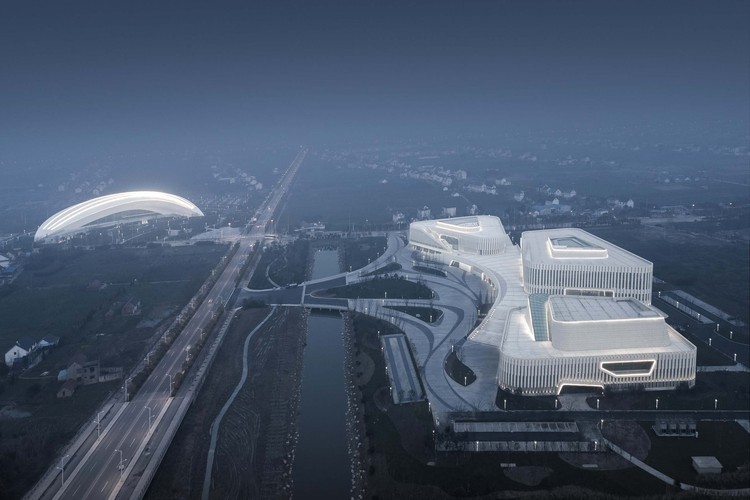 Rudong Cultural Center
Rudong Cultural Center is located in Rudong County, Nantong, Jiangsu Province. The project includes the first phase of the project: library, cultural museum, museum, second phase of the project: Grand Theater and cinema. As a part of the cultural core of the new area, it constitutes the symbol of the new area togethered with the Sports Center Group on the north side, prospering the cultural industry and becoming an important driving force for the development of the new area. The project launched a design competition in 2012. Tongji University School of Architectural Design, with won the competition. Since then, it has experienced many times of optimization and deepening of design. The project started in 2015, and the first phase of the project, was completed in 2018.

Agglomeration and Sharing
In order to create Rudong's cultural landscape line and emphasize the cohesion and radiation of cultural center, l library, cultural museum, museum bite each other on a large platform, and place four-storey libraries in the central position, three-storey museums and cultural centers on both sides. The three venues fluctuate and fall in different shapes, creating a rich and varied urban architectural interface. The platform carries the public supporting facilities needed by the three venues and fully realizes the sharing of public resources. At the same time, it integrates the three venues, leads the gathering and evacuation of people, guides the public participation of Rudong citizens, provides outdoor art exhibitions, parent-child entertainment and large-scale outdoor public welfare activities, and builds a good cultural exchange and sharing atmosphere.

White Roof
Rudong is known as the Golden Coast, the vast south Yellow Sea and the endless sandy beach are designed to construct the future "Golden Coast" of Rudong in the city. Architectural form, like the great waves of the Yellow Sea, beats the coastal reefs, presents the architectural landscape of ebb and flow, and accumulates the history, culture, science and technology, art and life style of Rudong, with beautiful and smooth curves and light. The rounded architecture reflects the fishing salt culture and folk customs of Rudong, and achieves the mutual penetration of architecture and city, vision and space. The building volume of the three venues rises slowly from the platform in the middle, and the platform is connected and talked with in the form of steps or inclined roofs.

Facade design
The cultural center, in the form of three unit blocks such as glittering and brilliant gems, is inlaid in Rudong, a coastal city with a vast area of blue water. Its ups and downs gradually change in architectural form, which reflects the sea style of surging tide. The dense and compact elevation has excavated a part of the entrance, which is the impression left by the reefs after the waves. The exterior facade of the building is made of beige stone, which strengthens the sense of volume of the building, spreads the windows along the exterior surface in a neat and orderly vertical way, guarantees the lighting and ventilation of the library, cultural library, reading and training function rooms, and adopts dense and compact vertical joints among the floors to make longitudinal changes. The glass curtain wall is used at the entrance and part of the building to achieve good lighting, realizing with cities and rivers. Dialogue, glass and stone contrast, highlighting the cultural temperament of the building.

Cultural Museum
The building area of the cultural Museum is 13861 square meters, with three floors. On the first floor, there are cultural restaurants, entertainment bars, activity rooms for the elderly, children's activity rooms, 435 people's theatres and rehearsal halls and cosmetics rooms. On the second floor, there are intangible cultural heritage and peasant painting exhibition halls, training classrooms and creative rooms. On the third floor, rehearsal halls, recording rooms and office rooms are set up. Around the middle daylighting atrium, the building is interspersed by two triangles with high and low slopes, creating a rich form. The roof naturally rises from the platform step by step, which leads the flow of people directly to the two or three-storey atrium of the cultural hall.

Library
The building area of the library is 28670 square meters (including underground parking lot) and has four floors. The main entrance is located in the second floor of the platform. The central part is the main entrance for readers. It has a reader hall, a book lending consulting desk, a children's reading room, a multimedia reading room, a periodical and newspaper reading room, and a reading room for the blind. The open-shelf reading is in the form of an inclined staircase, emphasizing the rising form. Out of the southeast corner entrance below; the reading rooms on the third and fourth floors and the functional rooms are closely around the atrium, revolving and rising around the central open reading space. The reading room uses the form of loft to create an atmosphere of communication and sharing, and brings readers a variety of reading environment experience through the spatial changes of multiple levels. Bookstore area and staff acquisition and editing, office area are located in the east area of the fourth floor.

Museum
The Museum has a building area of 9954 square meters and three floors. The main entrance is set in the north, the south is set up with warehouses and logistic office rooms, the west is set up with conference reports and VIP reception rooms, and the middle is L-shaped daylighting atrium. All kinds of exhibition rooms are set around the atrium. The second and third floors are all exhibition rooms. The air coffee bar is set on the west of the second floor, which enables visitors to sit down after watching the exhibition. Come and enjoy the beautiful river scenery of Rudong.

Rudong,like the sun rising from the east, hoping  that the construction of Rudong Cultural Center will create a beautiful coastal city, a bright golden coast, and add a brilliant glory to the city! 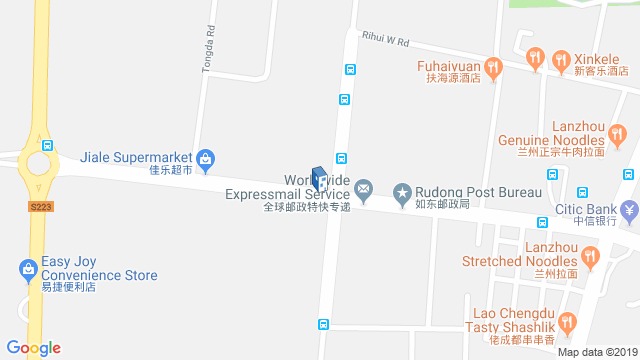 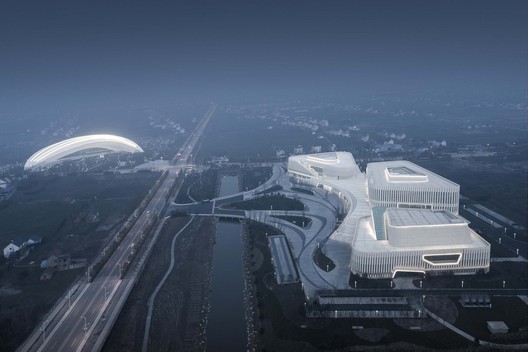