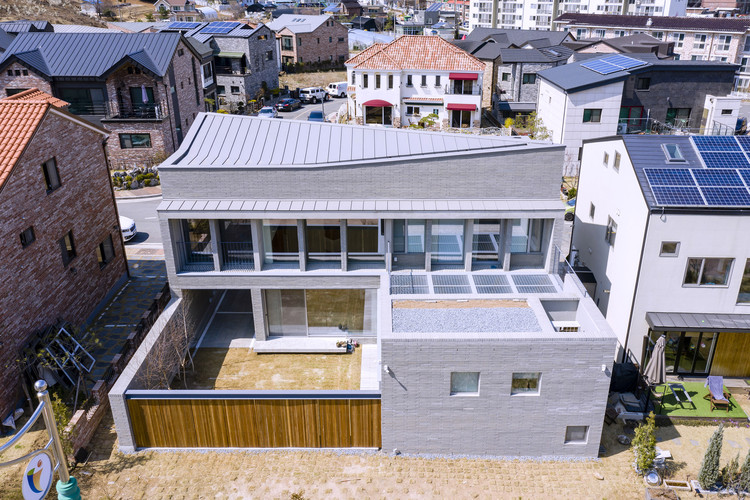 Text description provided by the architects. From the first inception, this small house project is conceived to have its own meaning in itself through its own architectural form which is mainly considered by following three terms.

(Re)interpretation of spatial forms in general Korean residential culture
Entrance hall(hyeon-gwan, 현관) of Korean contemporary house has a type which is found only in few cultures, taking off or putting on the shoes. But the role of entrance hall is limited only for spatial transition isolated from the other parts of the house, and occupies little parts with almost same form.

This small house project begins to transform a familiar entrance hall into a very unfamiliar and totally new one.

The long, slender shape with top lights is not familiar one as an entrance hall. The space, parallel to the front road, has 3 different corridors to the other parts of house : a living room, a kitchen/dining room, and upper floor. It makes the entrance hall always connected and avoided the isolation with other spaces. By being equipped with a wash room and a laundry space inside, it becomes always usable and approachable in everyday life not as merely transition space. Now the entrance hall has totally different status in this house in the sense of architecture and life both.

Architectural elements and forms
Unlike first look of familiarity, more attention would reveal meaningful ideas in the sense of architectural forms.

Only by putting different elements to each, the two eaves of front north and garden faced south with same shape and size, gain totally different forms which carry architectural ideas. The eaves on front north, which are flying over a long, linear window, are supported one column which actually has no structural role, and only gives the sense of the stability. The sensation of weight by eaves is reduced to be floating in the air, and the non-load-bearing column seems like to take a load-bearing role. A contradiction in the structural sense occurs.

The other one on south is supported 8 wall-shaped columns (3 load-bearing, 5 non-load-bearing) which reduce the sense of opening in the south façade and take a role of sun shades. Structurally, the combination array of load-bearing and non-load-bearing columns reveals the structural ideas as it is and gives the house the look of structural authenticity.

Heterogeneity of materials under coherence
The use of the same originated materials (concrete) gives the look of oneness in appearance of the house : exterior walls with concrete bricks, the eaves and columns in exposed concrete. And the difference between these two materials gives the sensational pleasure of materiality of heterogeneity.

The interior space even with wood flooring and white paint gains its coherence with the exterior space in terms of materials by using concrete and terrazzo which shares same origin too. The sense of heterogeneity of material under coherent materiality is achieved.