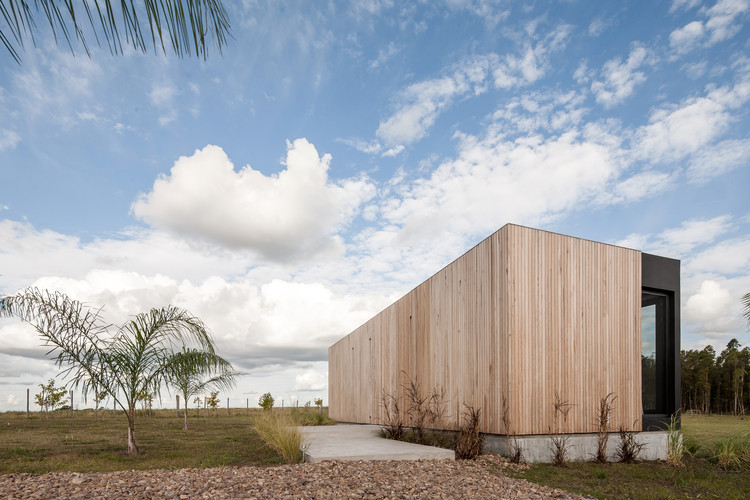 Text description provided by the architects. REPII represents the second part of a project carried out by the Office years ago. On this occasion, the concept of the project consisted of expanding the capacity to receive family or visitors. The word enlargement often assumes a meaning of expanding on the built, expanding a space "stretching" existing limits to conceive new spaces. For us, these new spaces should be conceived as spaces disconnected from the main house, allowing guests to enjoy privacy in intimate moments and thus make the most of contact with nature.

The construction of projects in remote sites or with limited access, often affect the natural state of the site, providing materials, control over the work done, among other things. The modular prefabricated construction helps to mitigate these factors, the house is built in a closed environment, away from climatic factors, close to all types of material supply and (usually) near the office or the client and then sent (by truck) to its final resting place semi permanent. Site whose intervention was minimal, where its natural state was minimally altered and thus maintain its natural essence. A grateful landscape.

Each module is developed in 518 sq ft. (48 m2) It was designed to house, a single person, a couple or couples, families, friends, cousins, in short, flexible to any inhabitant. The interior is subdivided into 3 defined spaces, but without doors that separate them, allowing to break with a traditional concept of delimiting the interiors and thus emphasize the connection between people. The spaces are defined by two bedrooms, a living room or intermediate space, a kitchenette and a bathroom.

The interior measurements were defined by the width of the planks whose lines coincide in all the vertical and horizontal planes of the house. Obtaining a minimum waste of the planks, almost without cuts or adjustments and a homogeneous view of the space.

The view towards the landscape, fixed windows that allow a maximum vision with minimum restriction. The perspective causes that when one moves through the interior, it seems to be floating from the ground, without touching it, without getting wet and alien to the cold or the heat. An extreme feeling of Refuge. Refuge + Landscape = Refuge in the Landscape.

The North façade, exposed to the sun of the Southern hemisphere, has a series of shutters, almost invisible when closed, which allow controlling the entry of solar light in summer and make the most of it in winter, as well as allowing the sector to be more exposed to establishment.