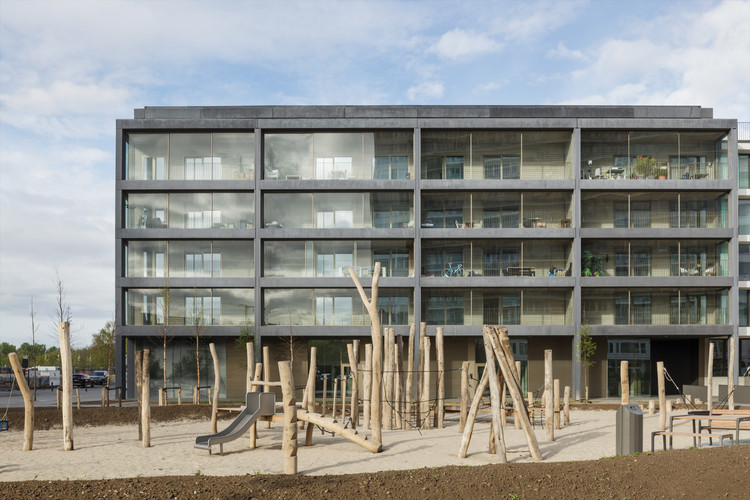 Text description provided by the architects. Atelier Kempe Thill searched for an architectural expression that could create a dialogue between this more traditional view on things and a possible more modernist orientation towards the future at the same time. The slightly higher budget compared to more common circumstances allowed in the end a very solid materialization hard to find within the contemporary condition of European housing.

Technically the façade expression also has to solve the Belgian fire rules that consider winter gardens as inside spaces with the consequence that along the façade a distance of 1metre fire proof façade has to be respected between neighbours, horizontally as well as vertically.

For all these reasons the façades are set up in prefabricated concrete elements. Beams and columns have sections of 60 cm height x 40 cm depth to fulfil the distance of 1 metre for the fire department. The loadbearing beams along the east and west façades are up to 11,5m long and create winter gardens of an unusual length. This length assures that the relatively fat dimensions of the concrete elements are brought back into a harmonious proportion to their total size and add a refreshing monumental scale to the building as a total.

On the head façades large scale non – load bearing concrete elements of partly 5,6 metres x 3,2 metres create a special quality out of the fact that the percentage of glass in the insulating part of the façade is limited.

For Atelier Kempe Thill it is the first time to work with a façade entirely made out of prefabricated concrete elements. The concrete is chosen in anthracite colour and with a smooth and polished surface. Each element is custom – made. The dimensions of the elements even allowed to integrate rainwater pipes and at the very end of the execution foldable fire ladders into the columns that had been demanded all of a sudden by the fire department.

The concrete elements are combined with large single glass sliding doors for the winter gardens that on the fourth floor reach up to 3,2 metres by 3,5 metres per element.

To give the winter gardens a liveable and cosy atmosphere they are in the interior entirely covered by a wooden cladding. The “woodiness” of the terraces also contributes to the appearance at the outside giving the building a welcoming vibrancy balancing the formal monumentality of the concrete elements and the sliding doors. With this concept and all its ingredients the project tries to offer a modern and light life style with at the same time an architectural answer to the more physical character of Belgian culture. 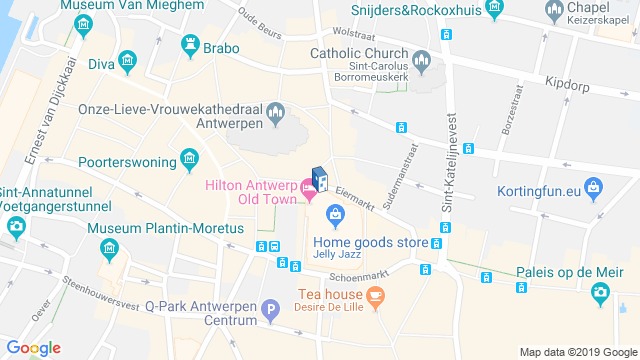 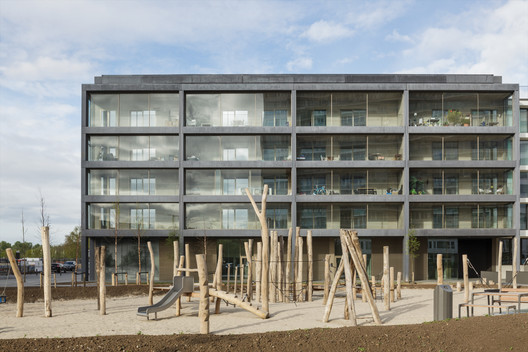