Save
16 Temporary Pavilions that Reflect on Public Space 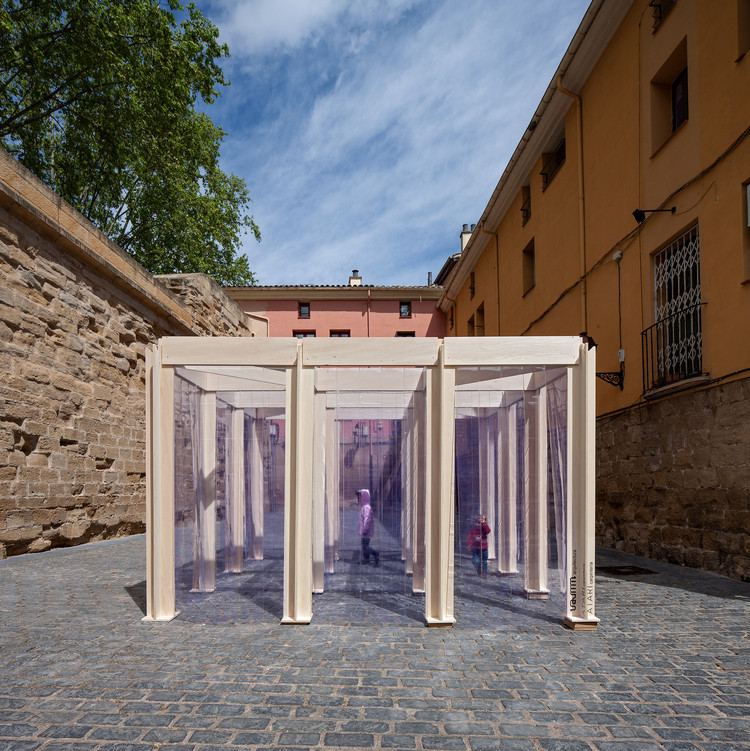 The International Festival of Concentric Architecture and Design is characterized by its temporary displays that take place throughout the city. For this year's festival, 16 exhibits have been created that seek to experiment with spaces both within and outside the city of Logroño, bringing with them a whole new way to see and experience the urban surroundings.

Journey around the Chestnut Tree
Pablo Losa y Gadea Burgaz
Situated in the Escuelas Trevijano Plaza, the pavilion pays tribute to the plaza's principal landmark: the chestnut tree. The pavilion's plywood porticoes are assembled without nails or screws. The objective of the exhibit is to give viewers a whole new appreciation for the tree once the exhibit is taken down.

3x3
Vaumm
Located in Revellín's Wall Plaza, the 3x3 pavilion sits opposite the wall, as if to have a conversation with it. The wall, a solid, impenetrable structure, stands in stark contrast to the pavilion, a solid but permeable fixture. Its transparency isn't just for translucence, but also creates reflections that dance across the walls and floor of the structure. At night, the pavilion is illuminated, transforming it into a lamp and making its exterior disappear before the eyes of viewers.

Passage
Alfredo Baladrón
The structure adorns the chimney of the Tabacalera, in a space between dividers. The exhibit aims to change the character of the space hosting it, inviting viewers to take a seat and enjoy the view. The structure is made up of wooden boards divided into four parts that come together to form fixtures and porticoes that allow visitors to sit down. The way the wood is cut will allow it to be reused once the structure is taken down.

Nolla
Robin Falck
The display is a nod to the eco-cabin, Nolla, originally built in Finland. Once built, it will produce no polluting emissions, the idea being that the structure will inspire its audience to decrease the amount of waste that they produce. The pavilion is located in the School of Architecture's patio and invites its viewers to reflect on the reduction of waste and pollution, not only during the construction process but in everyday life as well.

Ebro's Candle
ENSA Normandie
Ebro's Park was named one of the new locations for the festival as a way to illustrate new kinds of urban space. The display is an entry by the Normandía Rouen School of Architecture as a reflection of its new partnership with Concéntrico. The pavilion's wooden posts offer a visual representation of the verticality of trees and the candle that moves with the wind allows the space to change with different weather conditions. The space beneath the candle will be used for different workshops and activities.

Subterranean
Lucas Muñoz Muñoz
The proposed display, located in the Calado de San Gregorio, is to be built within the empty space of the museum as an extension of the already existing structure. The display is a tribute to the city's skater culture, represented by the wooden ramp that will be placed in the museum's cellar.

Living Church
Parasite 2.0
A display of morphological animals inspired by the church's altar, the exhibitions will be put in strategic places in the patio of the Santa Maria del Palacio Church.

Taburete Tower
SZCZ Jakub Szczesny
Built with wooden boards, the display is located in the headquarters of the Cáritas Foundation in Casa Farias. The structure is made up of stacked furniture modules that will be given to people once the festival is over.

The Mysterious Columns
EBBA architects
The 12 columns represent the 12 months of the years as well as the 12 stars on the European Union's flag. The columns will be re-positioned from day to day. Six of the columns have an illumination function that will transform the plaza.

The Tower
Archwerk
The exhibit is located in the patio of San Bartolomé's Church, a public space currently in the midst of a transformation. The tower is an opportunity to reconfigure the space and is inspired by the church's own Roman tower. Keeping in mind symmetry, a key factor in Romanesque architecture, the designers have created a tower made up of  90x90 cm wooden planks and that mirrors the exact proportions of the tower that inspired its creation.

The Page
FAHR 021.3
The project, located in the San Bartolomé Plaza, proposes that public spaces serve multiple purposes and should, above all, be flexible. There's no specific architectural procedure for a piece like this, but the structure, in this case, the page, folds in order to adapt to the space.

Everything's Fine; We're Designing
ESDIR
The display is located in the Escuela superior de La Rioja. It is a work by the students of the "Ephemeral Architecture" course. They wanted to take the design out of the classroom and put it on display as a way to show the people of Logroño that "here, we are designing."

The Wooden Covering Over Cars
Benedetto Bufalino
The piece serves as a critique of the use of cars in the city, from the space that they take to the pollution that they cause. Located beside the El Espolón walkway, the wooden display lays over a line of cars, almost like a sort of "vandalism" that gives the space occupied by the cars back to the city's inhabitants.

Tea, Chocolate, and Coffee
Knitknot architecture
The exhibit is displayed in the La Rioja Library's patio. Designed like the stage of a puppet show, the display provides a space for public readings of the library's books on its own patio.

Stairway to Heaven
Juan Llamazares
This installation, located at the Bodegas LAN's Lanciano vineyard, brings together linear elements (the rows in the vineyard) and vertical elements (from the structure itself) to form an overlook. The structure is located at the intersection of two paths and offers visitors an alternative vantage point from which to enjoy the vineyard. The stairs themselves are made of wooden planks that span the length of the structure from top to bottom.

Signals 1.0
Tools for Action
A performance with a political message taking place in a public space, Señales 1.0 explores how technology can be used as a way to interact within a public space. Each performer carries a plastic device, resembling a backpack, that lights up red as they move along their route through the city.

It's important to note that all of the project proposals are a part of an open call to architectural firms around the world to submit their work to be a part of Concéntrico 2019. For more information, please visit this link. 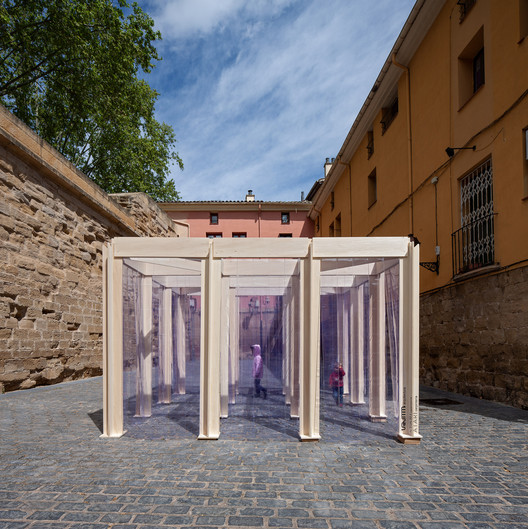