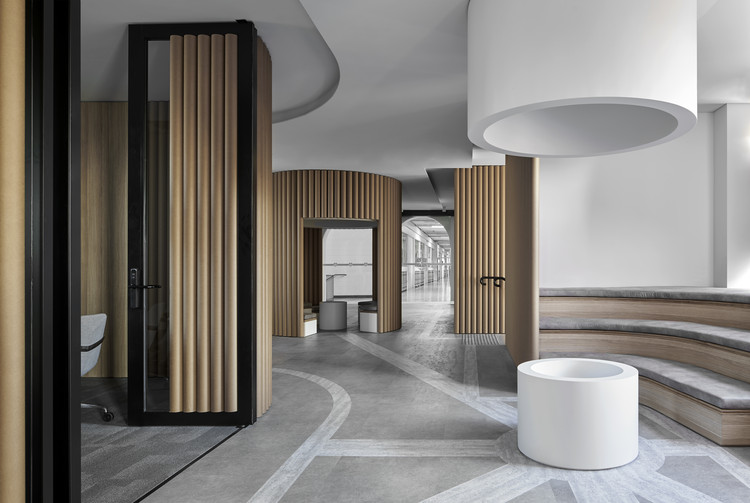 Text description provided by the architects. The Piazza Dell’Ufficio is a re-imagining of the former Caroline Chisholm College`s Executive Administration offices. The spaces are to be primarily used by school hierarchy staff, accounts department, student welfare and cater for various size staff and student meetings. Formally the existing space was a dark rabbit-warren of small disproportional office spaces and a meeting room with very little to no natural light. Highly-inefficient and not susceptible to any form of good or flexible working environment, the mostly blue painted, late 1970`s, broken, cream venetian blind screened block provided little to no humanistic interaction for its users.

Our pedagogical objective was to create a space, which reduced the visual barriers between staff & student interactions. A space where day-to-day Administration practices could occur but as the space also caters for student welfare - students could feel comfortable meeting up with a staff member and have a chat. Given this pedagogical objective, we derived the Idea of rationalising the space as a central public Piazza linked by two primary monuments to form the basis of the project. The two primary monuments being - 1. Clock Tower and 2. Public Forum.

The central public plaza is a destination/primary meeting point for student and staff interaction. It also acts as a forum for the school principal and various other hierarchy staff to address staff in numbers. The working office spaces become the ancillary ‘buildings’ off the primary Piazza. The formal composition of the space creates a diversity of working spaces. These cater for individual offices, shared office spaces, various meeting areas and hot-desk working environments.

Purposeful visual cohesion is created throughout using a very cost effective partition methodology of Cardboard tubes [$2.50 each], to sculpt the interior spaces. The tubes both individually and in mass are used to create a continuous visual curve & warmth to soften the interior spaces throughout. Light is an important element of the project. The control of light creates an extension of the internal formal curvature. The careful control of light also creates visual and contextual narrative referencing the subdued light cast underneath the porticos and formal archways used in 18th century classical and neoclassical architecture. Formally a profiled dropped ceiling extends the curvature of the space in section and creates more intimate spaces at primary ‘meeting’ points - where dome-like Coffers occur in the Clock Tower & Public Forum.

Classically derived archways also create a formal entry into the space from an existing school corridor and also into the three office wings from the primary Piazza. Formal lines in the floor finish create visual axial links between the primary ‘Clock Tower’ and Public Forum/ Sculpture space. Similarly, lineages in the floor treatment are made between entry, meeting and office spaces. 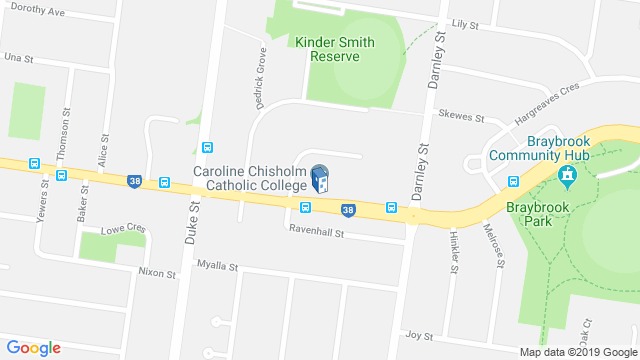 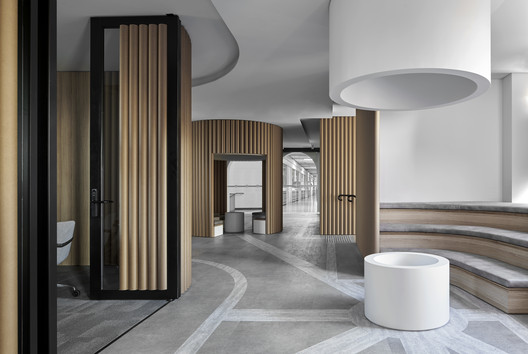