MUDA-Architects has released details of their M50 Art Hotel project located in Pingle, Sichuan, China. Situated within an ancient town with strong musical heritage, the design process for the scheme involved exploring and activating local cultural genes, creating a landmark building that reflects its historical context, with an architecture that is forward-looking. 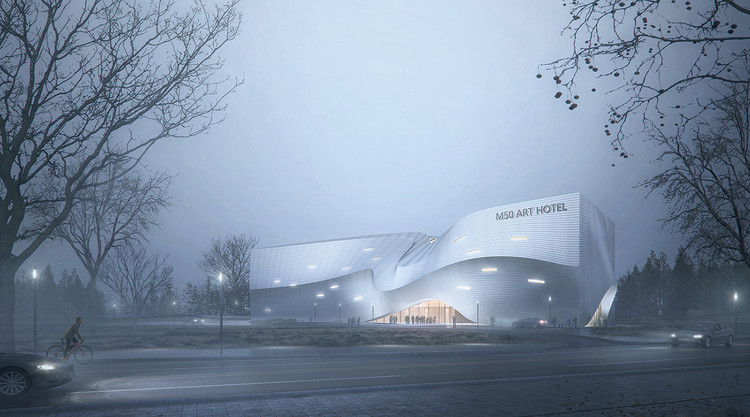 The volume consists of several dynamic curves, and a flowing surface that reflects a musical rhythm. An exterior curtain wall is comprised of horizontally-subdivided aluminum plates, with a bamboo texture referencing the bamboo culture of Sichuan.

We learned that the love story between Zhuo Wenjun and Sima Xiangru happened in Qionglai. Taking the song "Feng Qiu Huang" as the starting point, guqin was found, and the strings were extracted. The project abstracts the action of "touching the strings" into architectural form. When the strings solidify at the climax, the final form of the building is obtained, which also responds to the theme “Architecture is frozen music”.
-MUDA-Architects

In total, the building spans 80 meters, with an average width of 20 meters across its four floors. The main entrance to the building is located below the most fluctuating part of the form, the climax of the exterior form’s movement. An open boundary is created by the rhythmic curve, while the use of transparent glass and glass keel maximizes the permeability of the entire entrance. Two secondary entrances are located on the short sides of the building, echoing the main entrance in their design.

The façade design on the balcony side further continues the design concept, with overlapping layers interlaced to form the space, and its rhythmic effect. As well as meeting the functionality of the resort hotel, the design of the balcony also implies the design intention of integrating architecture with the rhythm of music.

The internal scheme has four floors, with a public corridor on each floor continuing the rhythmic curve elements. A spiral staircase organizes vertical circulation into the 16-meter-tall shared space, combining with the spatial and environmental characteristics of the hall to promote ecological strategies such as green vegetation.

The site is expected to be open in August 2020.