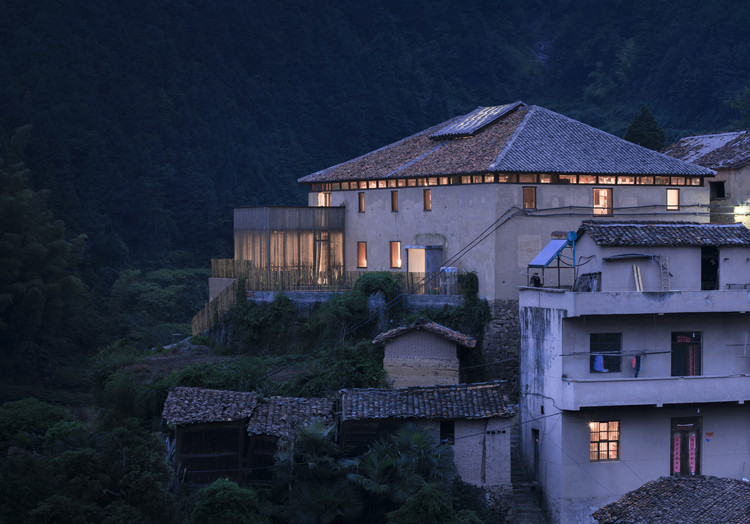 Text description provided by the architects. There are about one million villages disappeared in last 20 years as China’s fast urbanization process, Young people leave for big cities, thousands of hollowing out rural villages facing the fate of dismantling.

This renovation project took place in China’s southeastern inland area that is dominated by hills. Unique cultural and geographical conditions have fostered the development of the distinct cliff settlement form as represented in the Chenjiapu, one of the hollowing out villages, right where the project lied. The exclusive regional characteristics were the essential dimensions considered for the project, with material selection strictly abiding the local principles, and the degree of openness to nature being prudently handled.

The Tradition of Craftsmanship
The renovation project was conducted on the basis of an old site of the villagers’ Hall,It took the form of a 11 X 18mtwo-story space.A box were added in the building’s southwest corner, including the terrace with view on it’s top. The previously closed hall structure have now become more open to correspond with the openness of the surrounding landscape. Right at the very center inside the building, a suspended semi-transparent box lies under the skylight, forming a “container” of subtle natural lighting and thus becomes a focus point within the internal space. The functional theme of “meditation” that is highlighted at this point culminates the expected solemn and ceremonial atmosphere at the library. A small amount of fully-transparent or semi-transparent materials, such as glass and solar panel, serve as the background of the traditional wooden structures. The spatial division and organization still exist and is reinforced by the distinct forms and contrasts with the traditional materials. Such new materials as metal, glass, and concrete are expressed as abstract geometrical surfaces. The existence and contrasts among plaster, logs, and hemp ropes has also been intensified. The secondary linking members of the previous wooden roof trusses has been greatly increased, forming a gentle and profound interface over the top, leaving the impression of a gradually diminishing boundary.

The design has been carefully considered to almost completely inherit the external features of the building, except for the 3x3m glass box at the southwest corner. The new design has balanced the dramatic effects of the internal light and the external landscape in a restrained way. The new library, the old hall, and the even more archaic village community, has altogether formed a continuously growing cultural spirit and existence of the settlement.

Reading Space
As a small public library in the village, and a rural bookshop that its operator —— Librairie Avant-Garde —— is hoping to present, The layout of the building’s internal axes, together with the seemingly-dynamic, vertically wavy pattern formed by the three independent staircases, creates the complexity between vision and the experience of intra-dimensional accessibility, tranquility and openness, as well as the sense of containment and transparency.

The frameless glass openings on the, casting images of the pass-by villagers and shadow from the street lights. At the end of the entrance corridor is now a terraced reading space, along one side are large windows that opens directly to the view of the valleys. This is also where public events and shares of thoughts take place. Famous writers and poets like Ayi and Yu Xiuhua shared their stories with tourists and villagers. Visitors can go upstairs to the outside viewing terrace, which is also one of the best viewing point of the hilly scenery. The other two traffic flow paths are the straight staircase leading to the suspending meditation space at the center of the space, and the functional path that links the coffee area and two meeting area.

Although each of the spaces for browsing, reading, or communication, has its clear and definite enclosing boundaries ,the design of the entire space is still capable of maintaining the transparency of dialogues between readers and nature, between readers and space, as well as among readers.

Publicity
Librairie Avant-Garde is a thriving urban library bookshop operator in Nanjing with a good number of loyal readers. In recent years, in order to carry out its responsibility of cultural transmission and also for the purpose of brand innovation, Librairie Avant-Garde has continuously invested in the construction of libraries and bookstores to activate the value of hollowing outrural villages and expand the publicity of urban-rural interactions. The bookstore is not only a public infrastructure for decreasing residing in the village to rest and study, but also a space that looks to bring unique reading experience to the general customers. The result of the combination of the two functions is a new type of public space. By following the theme of “folk-custom encyclopedias” in its book collections, and in combination with not only the sales of products representing the traditional culture and local creative craftsmanship, but also the regularly-held poems and literary seminars, this space has firmly established itself as a generally-recognized attraction to the villagers and tourists, as well as a bridge between the urban and rural areas in a much broader context. The architect’s mission was to create a uniquely suitable platform for this vivid scene —— to utilize the Avant-Garde Chenjiapu bookshop as the window towards visualizing this wonderful sight, presenting tourists and villagers with different perspectives of the village, the nature, and the world.

The bookshop has achieved unexpected success since is opening in mid August. This remote village, which is over 800 meters above sea-level and takes a three-hour drive from the nearest big city, has received hundreds of guests from afar daily, and a stable daily income of over ten thousand yuan, which is far beyond the expectation of the founder of Librairie Avant-Garde, Qian Xiaohua. Librairie Avant-Garde regularly invites famous writers and poets to the library for events. A folk house in the village has been renovated to accommodate the guest writers and poets. Such a small renovation project has injected new vitality and impetus to the supposedly-isolated Chenjiapu Village and will definitely change the future of this remote place, and even the county to which it is located in the southern Zhejiang Province – Songyang- at large. 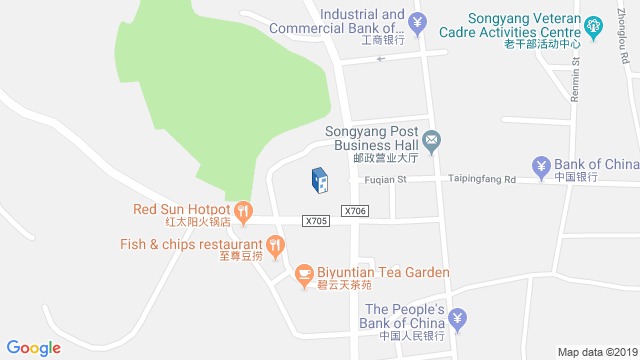 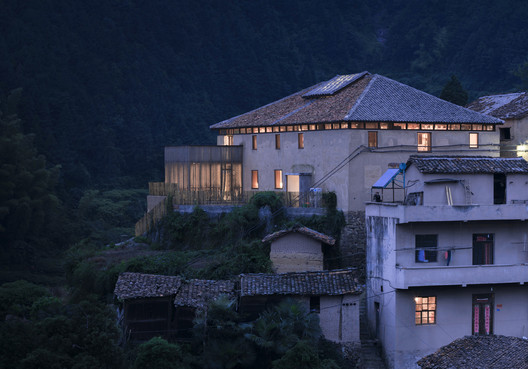