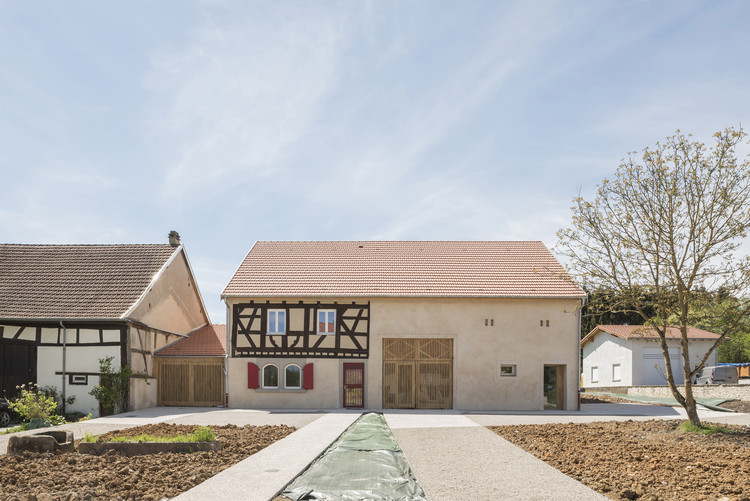 Text description provided by the architects. The project was born from the owners’ desire to accommodate people who are eager to discover their green and history-charged territory. It is located on a large plot of land, in a valley that once formed the Maginot Aquatic Line (a defensive system that allowed the valley to be flooded in order to block enemies). Five ponds remain to this day, where French and German fishermen fish side by side in amongst numerous bunkers. Above all, It is about a very large garden that the owner shapes in the manner of Gilles Clément. It is composed of a stream, an arboretum, an orchard, a pond, hedges, and grassy meadows. It is inhabited by many animal species, including birds.

The farmhouse is typical of the Lorraine region with its usoir (area in front of the house), its half-timbered dwelling-house (characteristic of this part of the Moselle area) adjoining a barn, built later with plastered rock rubble. At the start of the project everything was badly damaged — mainly due to a nearby water table, but also to the inherent fragility of a somewhat poorly-built half-timber construction, barely renovated throughout its history.

Quite a few pathologies associated with poorly-designed spaces (low ceiling, mono-oriented towards the street) forced us to reconsider this construction to its core, whilst making sure we respected a principle dear to the owners. Indeed, they consider that the exterior of the house belongs to the public, whereas the interior relates to privacy and intimacy. The original village-house aspect of the project is therefore preserved for the exterior, with a few contemporary additions here and there. Inside, generous spaces bathed in light and open onto the garden reinterpret the half-timber architectural work. 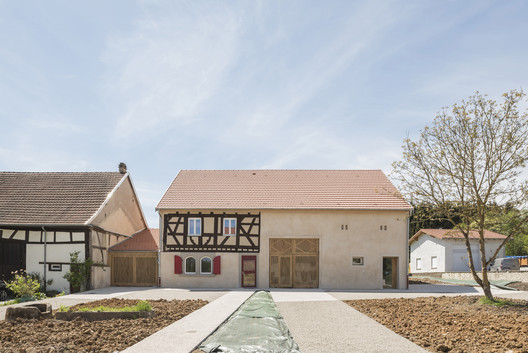