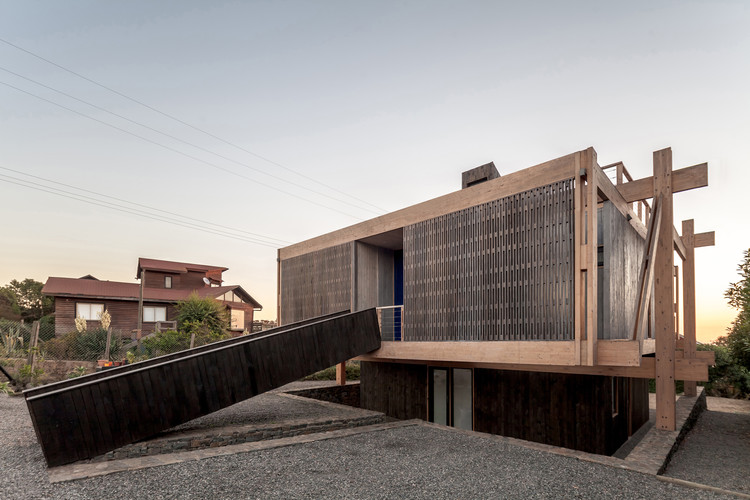 Text description provided by the architects. Based on the existing context, it is defined as a primary need to locate the main programmatic enclosures at the maximum permitted height according to regulations, in order to grant them the greatest possible unobstructed view.

According to this and in response to a sloping terrain that descends towards the view; the principle of the swing appears as a project image; interpreted as a structural skeleton that allows to read a hanging suspended volume, which levitates on the ground alluding to the exposure condition of the corner site.

In this way the structure is considered as a scaffolding system, defined in laminated wood of section 10x40cm, detached from the volumetric body, composed by the assembled crossing of four beams of 10,5mts long and four double pillars of 6.0mts of height, placed punctually on a stone perimeter containment as a shoe that protects and establishes the lower level of the house.

As a complement, vertical circulation is worked as a hierarchical element, as a central skylight, which orders, distributes and grants spatiality to the programmatic resolution of the house.

In relation to materialities, the use of wood as a unique material was privileged, both for economy and for its durability over time in saline environments.

The structure of laminated pine is treated with 10% white waterproofing varnish of Cutek, for the exterior cladding 1"x4" gross cover board treated with black waterproofing varnish and Wetproff smoke was used; as for the floorings, for the interior floor board was used 1”x5" vitrified colorless and for outdoor deck table edged 1 1/2"x5" impregnated. 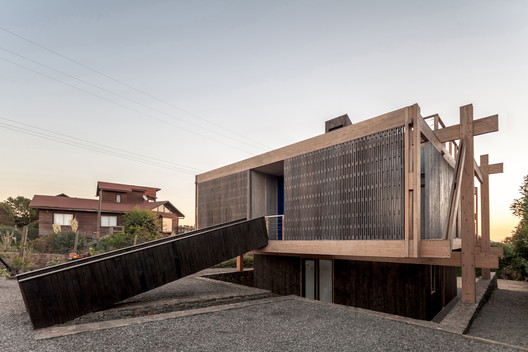