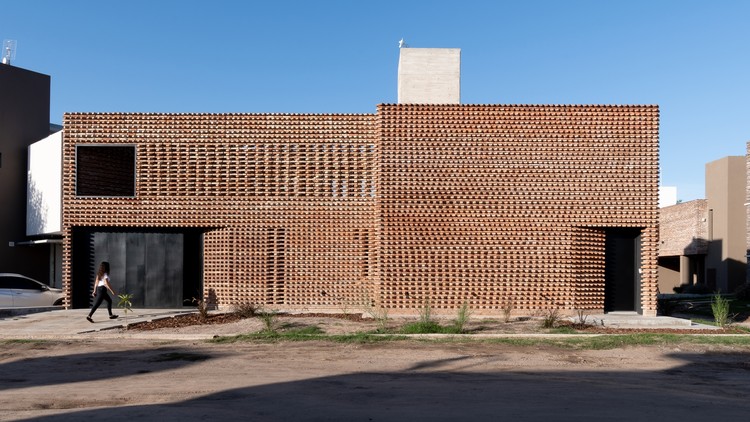 Text description provided by the architects. CH House is located in the north-west area of Córdoba. The project starts with a single-family housing program on an irregular corner plot with a single adjoining dividing wall and exposed on the main street.

The objective was to generate an intimate environment, of privacy for its users, that allows at the same time to open to the neighborhood through an exposed, noble and attractive building, given by the game of a material characteristic of our culture: the brick. The qualities of lightness and resistance of this ceramic material allowed to generate this double provision between the private and the public.

This skin generated by a particular work, imposing and warm, blends with its surroundings generating blind spaces to protect itself from climatic and permeable agents through screening, emphasizing the visual connections of the terrace with its surroundings: the San Martín Urban Nature Reserve at west and the views to the city to the northeast, conserving the privacy to the users.

The philosophy of the project was to generate a constant dialogue with the environment at its different scales: with the neighborhood and with the city.

The proposed structure of the house resembles that of a box / cave, with clay brick being the protagonist. The general structure is composed and enclosed by two layers of brick wall.

The common ceramic brick has long been a familiar local material and widely used in Cordoba, by a simple method of manual construction.

This rectangular volume is posed in a north-south orientation, where the internal spaces open to the north, providing the necessary natural lighting and also ensuring that the house will remain thermally comfortable during seasonal changes. The project is designed for future extensions on the upper floor.

A volume break is generated towards the south, on the main street, with the concrete seen in this displacement, placing in the interior spaces of service and circulations with the purpose of “isolating chamber” of sounds and privacy. The result towards the exterior is a pure, blind and textured mural. The use of concrete and brick generate a formal balance of simple lines and give a character of timelessness to the work.

By designing the spatial diagram, the concept of materiality is based on a continuous geometry in all its exterior.

After the exploration in the parametric design, we define the coherence and repetition of a constant obstacle that generates a skin covering all the exterior of the house.

Starting from the rigging to ¨soga¨, in the second course a rotation of each brick takes place at 45 degrees. Alternating the courses, the skin was generated.

One of the main design goals was to create a visual vibration of the shape that leads to a sensory vibration of the atmosphere. In this concept, the external experiential situation in relation to the project is significant to understand the form.

Finally the objective was to develop a simple irregular locking technique to be executed by any constructor.

The games of lights and shadows that occur on the terrace is through the screening inspired by the traditional architecture of Argentina that translates into a modern design language. Also allowing constant cross ventilation.

The objectification of the thought process and its construction determined the different sensations and qualities of the spaces. 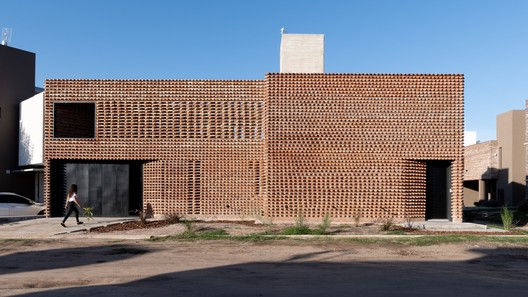