Text description provided by the architects. H.D. House has two floors. The beams, pillars and slabs of the lower floor are of reinforced concrete, and the walls are made with masonry of aerated concrete blocks, which are very effective considering thermal improvement. The second level is built with a Metalcon system of galvanized steel profiles and covered with walls ventilated with wood to improve their thermal resistance. The roof is also made of Metalcon, with a cover of pv4 sheets with polyurethane that resists the high radiation that affects on the roof.

Bioclimatic strategies:
The house uses bioclimatic strategies for the different facades and orientations of the project. The main facade faces west, towards the city, and has a mobile facade with sunscreens that generate a ventilated double skin on the second floor. In addition, there is a double height interior courtyard that enhances the Venturi effect and cross ventilation, producing air movements that improve the environmental quality of the house. These air flows can be easily controlled by opening or grouping the sunscreens.

On the north, south and east facades, where the living spaces have contact with the perimeter of the house, ventilated walls were built on the second floor and walls with blocks of aerated concrete on the first floor. The ventilated walls leave a space of 5cm for the air flow, which acts as a great thermal insulator. The walls of aerated concrete contain micro particles of air in their materiality which is very effective for the energy performance of the house. A triple insulation system of the roof ensures high thermal resistance. In addition, the use of thermo panels for all the windows of the house is considered.

Construction Challenges:
The west facade of the house follows a curved shape, which extends over the entire perimeter of the lower floor. Because of this, variable columns had to be used in the concrete slab throughout its whole area, which challenged the system of reinforcement of the slab, due to its very particular geometry. The shape is repeated in the roof, which means that all the trusses have a variable length as well, depending on the sector of the corresponding curve.

Another important challenge was the sunscreens. They had to be mobile throughout the length of the curved facade. They had to protect from the sun, but also be able to be grouped and opened up, since the best view of Santiago from within the house is on this facade. We studied different mobile protectors to build our own system. Finally, we used an upper and lower metal rail, with structural plywood plates framed in metal profiles grouped by two, with a simple hinge that can move them at different angles until they are parallel to the facade. 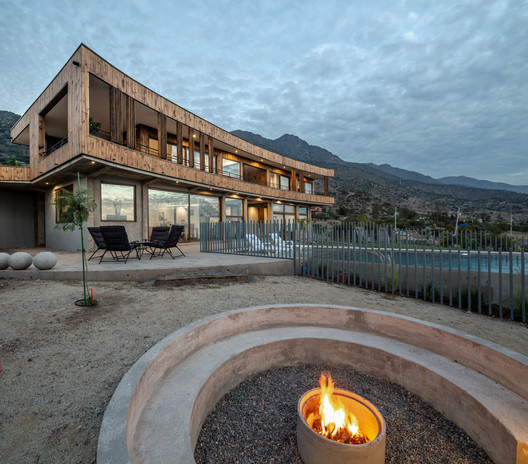