Save
House in The Center / Arkosis 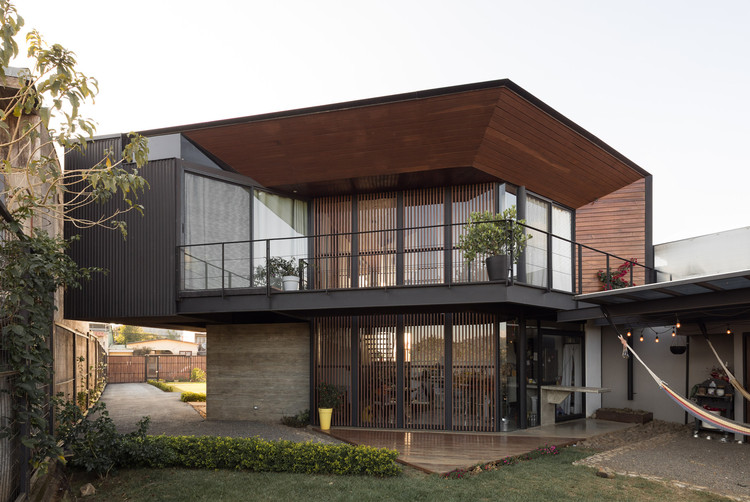 Text description provided by the architects. The house takes place on a property that remained empty for several years in el Centro (as San Ramon is commonly known in its outskirts) while it became strongly characterized by the buildings that gradually surrounded it. Despite their low material value, these facades were used as raw material to make evident how infrequently they are taken into account when new projects are designed (they are almost never shown in renderings, for example).

In this sense one of the columns of the old perimeter wall on the north side is extended to become part of the house which gradually grows in height, on the south side the profile of the neighboring house is reflected and almost touched; heights are matched, windows imitated; one builds from the borders inward until the house finds itself in the center.

The volumes are enveloped in materials that can be found on the these borders: corrugated steel and ordinary plaster. The configuration of the house is influenced to a greater extent by the rotation of the bedrooms in plan view, which motivates short and long walks and in turn forseeable and unexpected encounters between the two inhabitants of the house; this operation also achieves uncommon panoramic views from the town center.

Spaces are delimited by economic materials articulated in uncomplicated ways (weights deposited by simple support in most cases) and characterized by diverse lighting situations. In sum, the house is achieved in such a way that takes distance from the busy urban circumstances while being immersed in them,  by way of few means (materials, technique and gesture).