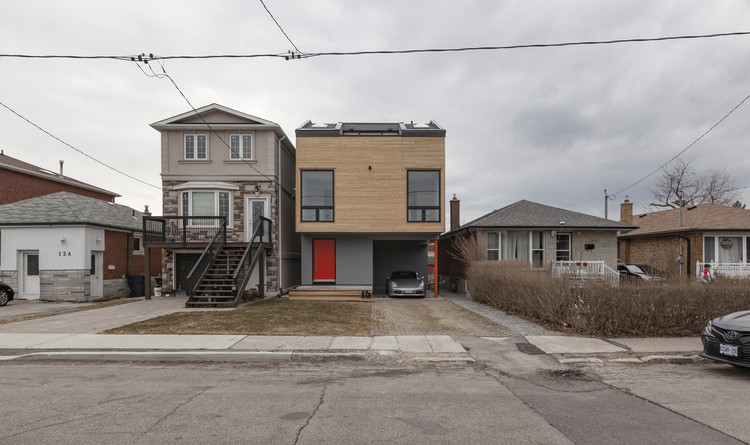 Text description provided by the architects. The house gazes at the street and the neighbourhood through the eyes of the two symmetrical windows, punctured on the mass cantilevered above the main floor, which resembles a face sneaking forward. Located at the Scarborough Junction, in the east end of Toronto, it was created respecting the narrow site, the restrictive budget, and all the speculations. Despite all these limitations, the house is like a curious creature; it contaminates its surrounding, made of typical Torontonian infill houses, with livelihood and inspires the possibility of design which belongs to everyone and everywhere.

The Gazing House originates from the two squares divided by the central circulation axis. This abstract formal system establishes a sense of order which unifies all the interior spaces into one, while within the same two squares, various room configurations can be made to accommodate the need of each floor. The central staircase organizes the programs binarily throughout all floors, being a transitional point not only vertical but also horizontal. This circulation space holds all the parts together as one body and soul and lets one experience the entirety of the house most directly.

The lot is oriented east-west, which allows limited sunlight to enter the house through the front and the back. Conversely, the skylights can receive the outside light throughout the whole day and illuminate the entire house through the voids and the openings. At certain moments, sunlight reaches all the way to the basement from the roof ceiling, generating a sense of spatial connection across the floors. The house is of a one, measureless void, which is one of the major themes of the atelier.

The façade is the direct expression of the innate order, as pursued by the atelier in all its designs. In the inside, one encounters the windows, the “eyes” to the outside, in various moments of the routine. Whether on a bed looking out towards the balcony window on the other end, or on the work station on the second floor looking out towards the backyard, or on the staircase to the third floor looking up at the skylight directly above it, the views are framed by architectural elements at specific points and within the order of the house so that one experiences them with both anticipation and surprise. These “gazes” towards the outside are interestingly mirrored in the gazing face of the house, which truly identifies with the life of the inside.

The Gazing House belongs to the lineage of the atelier’s creations which are all grounded on the spatial order and geometry. As a “positive virus,” it will affect, engage, and change its immediate environment, and slowly spread the impact to the Torontonian neighbourhoods beyond.