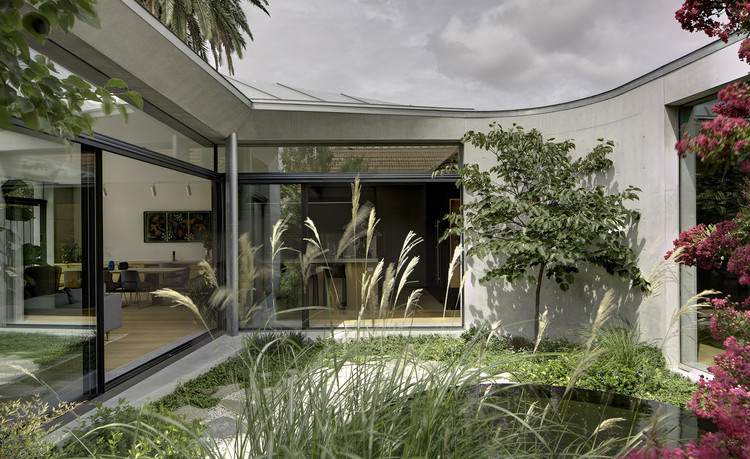 Text description provided by the architects. This house is an alterations and additions to a 1914 Federation style house in the historic suburb of Haberfield, just five kilometres west of Sydney’s central business district. Parts of a problematic 1990s addition have been removed and spacious and contemporary living spaces added: open plan kitchen, living & dining room, entertainment room and attic conversion.

Graceful curves of off-form concrete are revealed in views through and past the original building, opening to a striking courtyard garden and extension to the rear. A low-ceilinged garage in the corner of the very large block has been converted into a vaulted cabana space, creating a peaceful retreat and recreation area adjacent to the pool.

The plan and use of the house can be read through two distinct geometries; the original four-bedroom house, extended to eight rooms in the 1980’s, has the rational rectilinear form you would expect of a brick cottage from the turn of 20th century.

The new, concrete, glass and zinc addition scoops and leans into the northern courtyard and rear garden. The defining gesture of the rear addition is this courtyard which breaks up the long volume of the house and extends to form a sculpted second entry which peeks out to the street from behind the original brickwork.

This second entry anticipates the daily comings and goings of the family of six, with nooks to conceal school bags and sports gear. A monolithic curved concrete wall defines the passageway into the expansive light-filled kitchen, dining and living space.