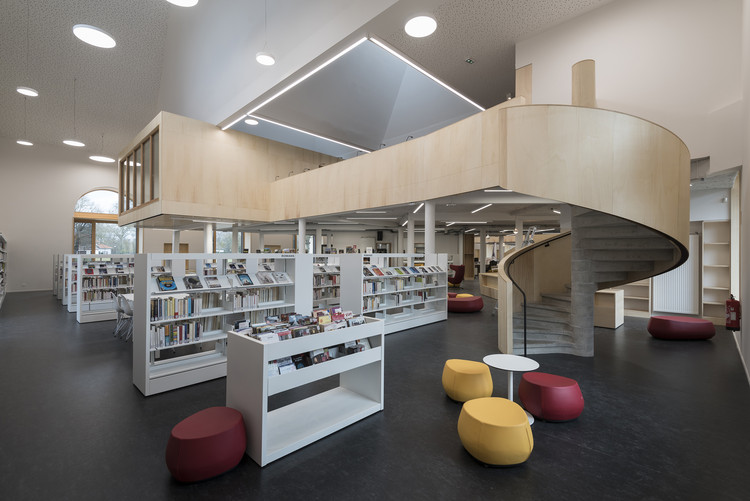 Text description provided by the architects. The project consists in the complete restructuring of the two existing levels of the Orangerie media library in Lunéville. The goal was to completely modify its layout in order to modernise it and allow exchanges and transversal practices between all the different protagonists.

The challenge was also to “give back” the media library to the neighbourhood and the street, making it more open to the outside — a media library is, after all, a window onto the outside world. After removing the old extension forming the entrance, which completely distorted the primary volume of the building, we opened the facades in the continuity of the existing half-moons. These openings are set on the basement stones and give the staff and visitors of the media library a better view of the outside.

These blinds are hidden in thermo-lacquered steel boxes, which are the same colour as the outer frames and their embrasures. These boxes replicate the dimensions and altimetry seen on the facade, the basement stone and the half-moons mentioned above.

The public entrance to the building is accessible from both the North and South facade. These two entrances are located on either side of a central atrium, acting as an important articulation in this project. It is indeed in this atrium that are located the main reception desk, the recreational area, the steps, as well as the meeting/concert space.

From this area, one can access every sector of the media library. Areas book showcasing are implemented at the top of the steps and in the construction of the railings on the first floor. The internal layout is like organised in a row of offices and facilities (lavatory, storage, elevator...), on both levels, occupying the south facade of the building, leaving a great freedom in the implementation of interior spaces.

The reading rooms, as well as the listening and viewing spaces are multiple and diversified. In that way, some of the project’s areas are set up for group work, while others are designed for individual reading. The reader is invited to curl up in the embrasure of the fitted out frames, sitting in between the inside and the outside, thus benefiting from perfect natural light.

Varied ceiling heights punctuate the layout all the way up to below the roof, where a sea of zenithal lighting is set up. These skylights, arranged in a rectilinear way, bathe with light the "carved" spaces in the voids in the suspended ceiling. The auditorium, the activity room and “story time” areas are located upstairs. The volumes are built out of wood and participate in the spatial organisation of the floor.

The project strives to respond to the various issues raised by the Lunéville media library program and to provide accessibility solutions to people with reduced mobility, all the while respecting the identity of the building built in 1854. The building’s thermal performance is close to that of a passive building, thanks to its design and compactness. 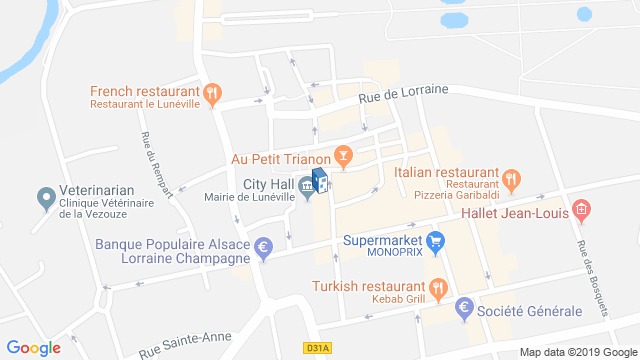