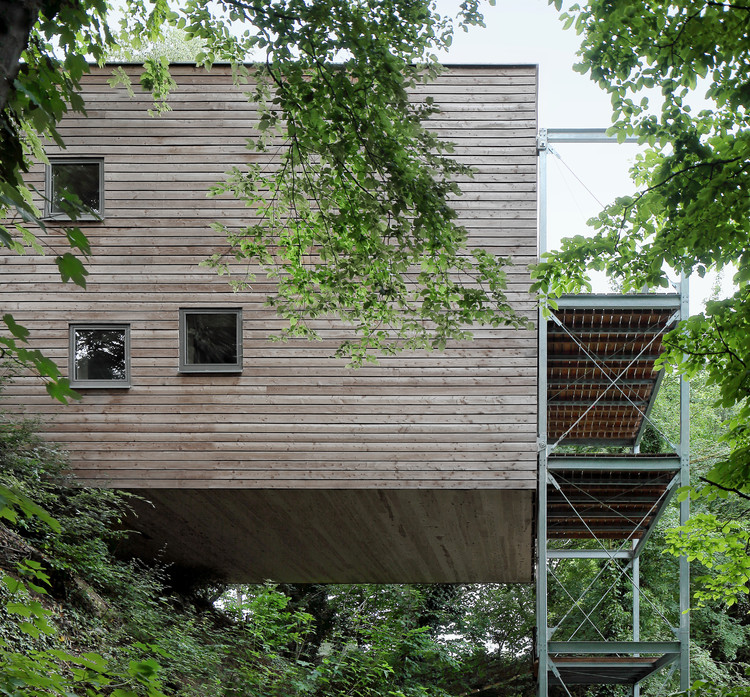 Text description provided by the architects. The building site was discovered during a stroll through the forest near the river Enns which raised the desire to live in the middle of nature surrounded by trees. At first sight, it seemed to be impossible to build a house there since only a narrow building area is located on even surface, the rest of it is a steep slope of six meters.

This special situation was solved with an unusual but also simple construction. The building got only partially placed on the solid ground; the bigger part of it is lifted off the ground and reaches into the tree crowns. A steel framework is supporting the construction.

From the beginning on it was planned that a broad part of the project was going to be carried out by the owners themselves. The easy system allowed step-by-step project management and made it possible to split up tasks between owners and professionals. After the foundation and the steel framework got delivered, the solid wood panels for ceilings and walls have been mounted within one week.

The further work such as straw insulation, the facade made out of larch wood, the terrace, the carport as well as most parts of the interior was carried out by the building owners. The loadbearing supporting structure out of plywood remained visible in the interior space.

Bright fir wood creates a natural atmosphere. The two-story living room with its tiled stove made out of uncovered firebrick builds the centerpiece of the house. The oven is able to heat up the whole building due to modern heat storage technology. Large-sized windows are bringing nature and its green color into the room.

Even more tree house feeling is possible when spending time on the balcony, which is supported by an airy framework. At the south-facing terrace, you can find a summery dining room in the middle of the forest. 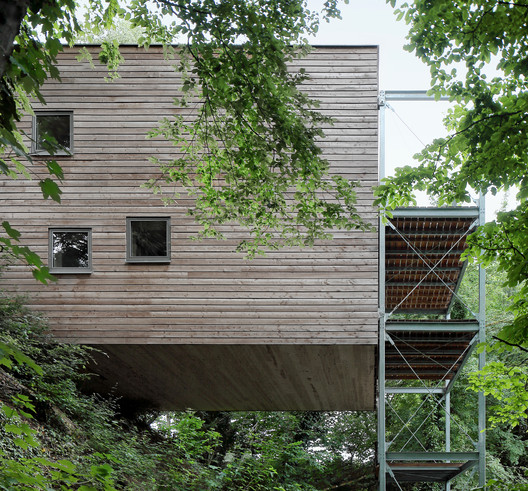