Blank Space has announced the winners of the sixth annual ‘Fairy Tales’ competition. With submissions from over 65 countries, the award-winning entries explore current events and the creative process through wonderfully crafted short stories and artwork.

The winners were chosen by a jury of more than 20 leading architects, designers and storytellers, including Moshe Safdie, Tatiana Bilbao, Jurgen Mayer, Julia Koerner, Mark Foster Gage and Jane Yolen, among many other distinguished judges.

Check out the winning designs after the break.

Francesca Giuliani, a co-founder of Blank Space, said: “This year’s winners utilize the power of narrative to explore complex issues like immigration, pollution, climate change, sea level rise, and the longevity of human impact. Time and time again, the Fairy Tales competition attracts creatives with a desire to inspire meaningful change in the world, through thought provoking and artistic submission that wrestle with the most urgent, real issues of our time.”

Since its inception in 2013, the annual Fairy Tales challenge has attracted thousands of participants, and winners have gone on to develop their stories into successful Kickstarter campaigns, short films, comic books, and exhibitions.

Lorena and Nicolas are both Colombian architects, based in Bogotá. Nicolas has spent the last 2 years exploring the frontiers of architecture and storytelling in the entertainment industry, where he has worked as an environment artist on video game projects for both national and international companies. Lorena is also a designer passionate about emotional and critical design, with experience on editorial projects that deconstruct complex narratives into digestible, stunning visual pieces. They strongly believe that architecture should not be limited to shape buildings, but also used as a stage for ideas and concerns.

“"The Fall" was inspired by the mass exodus that people from Venezuela have been struggling for a while now, and how architecture and urbanism are not responding to this social problem. This is not an isolated issue- as it has been happening around the globe, boosting the belief that borders should be closed. We have normalized this matter and we have become more intolerant about the circumstances in which immigrants are subsisting. We have reached the point where we make invisible those who are in a different situation from ours. This tale portrays the story of a homeless woman who falls into a world that has forgotten its past and shows how media have misrepresented sensible subjects like environmental issues and migrations. The narrative challenges the reader to have a critical view of how our actions affect the world we are living in, reflecting human condition and evoking emotional impact.’ - Lorena Cano Acosta and Nicolás Mendoza Ramos

Second Prize: Nick Stath, for his story “Monuments of the Past”

Nick is a concept artist, designer and illustrator based in Melbourne, Australia. Upon receiving his Masters in architecture from RMIT University, he has pursued working simultaneously as a designer in both Architectural Practice and the Entertainment Industry. His passion lies in creating visual stories of science-fiction that depict the relationship between the built and natural environment. His work is the continuous exploration of  space, scale, composition and atmosphere, intending to evoke emotion that allows the viewers’ imagination to traverse.

“My story was inspired by climate change and how we currently take the beauty of our planet for granted. My desire was to represent this issue through a story that makes us wonder what life could be like in a future where mother nature and her resources have diminished before our eyes. A world where parents have to tell their children stories of what forests, mountains and grass fields where once like. My vision for this future environment was a series of over-scaled structures that hoist man made landscapes into the sky. These structures represent the monuments of our past.” - Nick Stath

Anthony is a designer of dubious repute from Portland, OR. He studied architecture at the University of Edinburgh and the Bartlett School of Architecture and he has worked throughout the US and in the UK on various projects that have, at times, become startlingly architectural. He is interested in the relationship between the stories people tell, the things people make and the way that the two often intertwine to reflect each other. He currently lives in Brooklyn, NY where he hopes to make it big someday.

““Kraken in an 80 Million Gallon Tank” was written on a cell phone, on a commuter ferry shrouded in mist over a period of 4 work weeks. Beyond simply being an exercise in listing synonyms for fog, the tale imagines an uncanny future that is humid and sticky - a future where things have been set in motion and no matter how big we build or how intricately we plan, they cannot be undone. How do we make sense of such a future? How do we live on the tenuous ground that past decisions have engendered? In the end, it all seems pretty hazy.” - Anthony D’Auria

The winning stories and honorable mentions can be read in full on Blank Space’s website at: www.blankspaceproject.com. 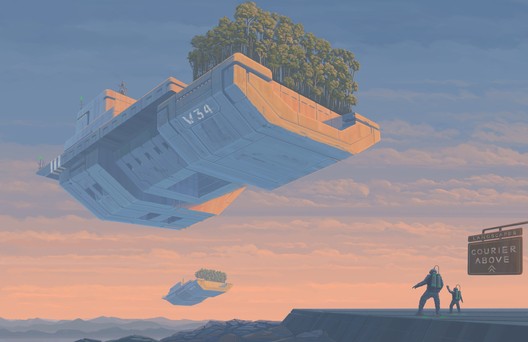