John Wardle Architects' Ian Potter Southbank Centre for the University of Melbourne's Conservatorium of Music has opened to faculty and students. The $109 million project was designed as part of the larger Southbank campus transformation in Australia. Made to house more than 1,000 music students, the project includes a series of performance areas, studios and rehearsal spaces. The Southbank Centre also features one of the world's largest oculus windows. 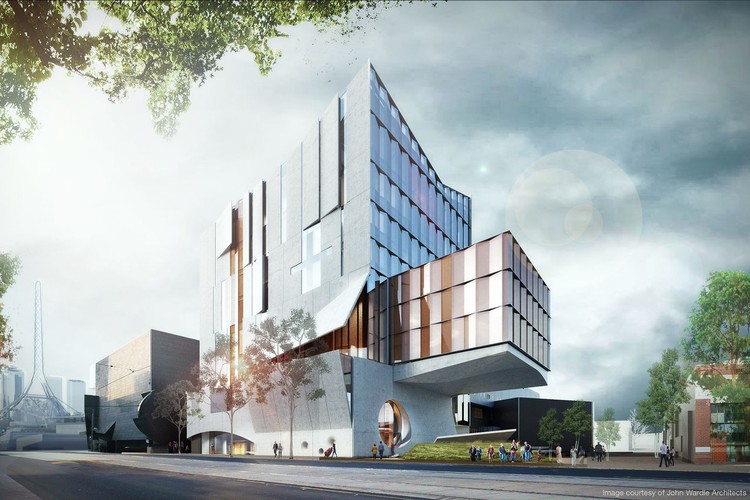 The Ian Potter Southbank Centre was formed around a 400-seat cantilevered auditorium and 200-seat ground-floor studio and orchestral space. These are connected to research, recording, performance and teaching spaces. Also inside is a wire balustrade made to attract the Melbourne Conservatorium of Music’s interactive composers. Outside, the area beneath the auditorium cantilever was made to act as a rotunda to host performances. This space will connect to a linear park designed by Aspect Studios. Along the street, portholes provide views into the ground floor auditorium.

Barry Conyngham, dean of the faculty of fine arts and music at the University of Melbourne said that, "The new Conservatorium will allow us to teach, rehearse, perform and record like never before. Currently, the Faculty has over 40,000 campus visitors a year and hosts more than 220 events, which will now be expanded with a public program of events at the Conservatorium that will enrich Melbourne’s thriving cultural scene.”

The Ian Potter Southbank Centre is officially scheduled for a full opening on June 1, 2019.