Gerkan, Marg and Partners (GMP) has won an international competition for the design of a new tower complex in Shenzhen’s “Super Bay City” business district. Consisting of three distinct blocks linked at the base, the primary tower of the Hengli International Building rises 250 meters to become an impressive landmark and a cultural destination for the new business district.

Located in Shenzhen Bay, to the west of the Chinese megacity, the urban masterplan containing the GMP scheme seeks to become a “high-density urban development with high-rise buildings of up to 600 meters.” Contributing significantly to the area’s skyline, the GMP proposal features three distinct volumes: a 250-meter-high office tower, a 36-meter-high conference center, and an 80-meter-high “culture tower.” Providing a rhythm to the tower’s verticality, “sky gardens” have been designed at various levels to be used as public amenity areas on the main tower, and the adjacent conference center and “culture tower.” 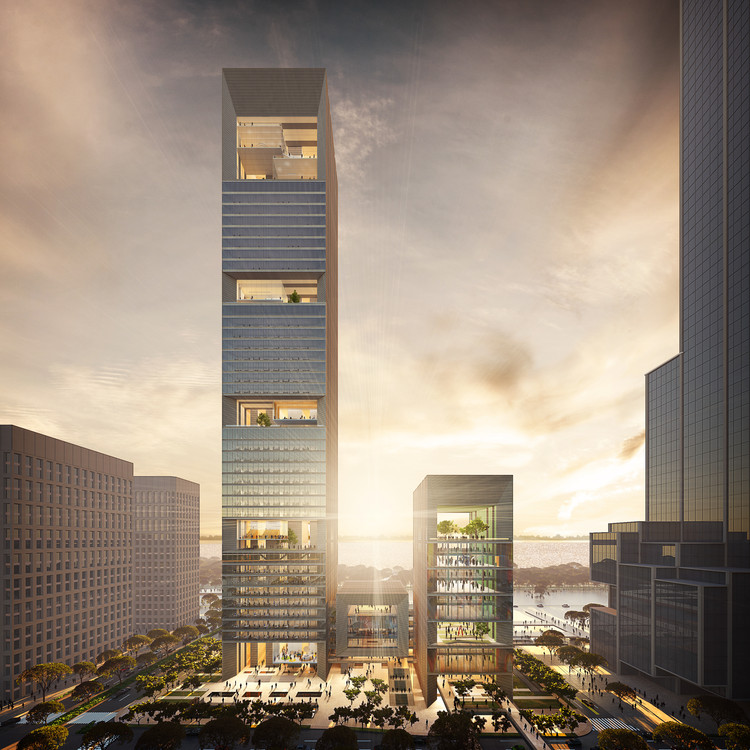 The east and west elevations for the tower are largely void of windows, with vertical glazed strips in the solid facades emphasizing the building’s verticality, in contrast to the gate-like appearance of the open, glazed north and south facades. The buildings are linked between the ground floor and sixth floor, allowing the ensemble to function as a horizontal unit. The scheme also expands downwards four floors, with the top two basement floors containing a shopping center.

The large open space to the north has been designed as an urban plaza, with pathways and bridges at different levels creating an attractive, dynamic public space. From here, the high-rise tower is accessed via a central core, with three-story-high sky gardens inserted at every eighth level to provide public landscaped areas. The gardens feature amenities such as a café, bar, book shop, fitness studio, and rooftop observation deck.

A similar principle emerges from the culture tower, providing an elevated public park and exhibition garden for sculptures. The eight-story tower is accessed via two core structures to the east and west, with interior spaces extending over two levels to include galleries and exhibition spaces.

The design of the scheme was led by Meinhard von Gerkan and Stephan Schütz with Nicolas Pomränke, with Hengli investment Group Co Ltd as a client. 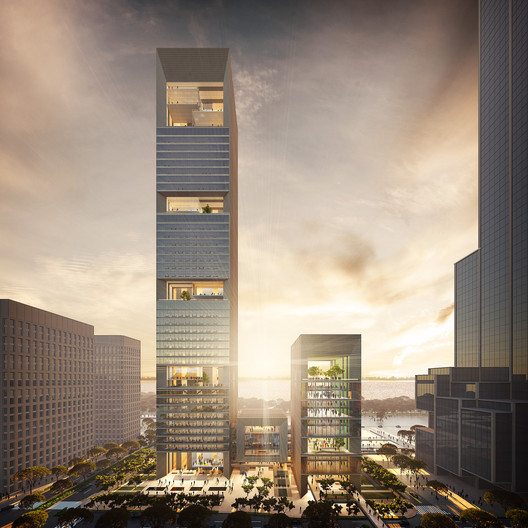