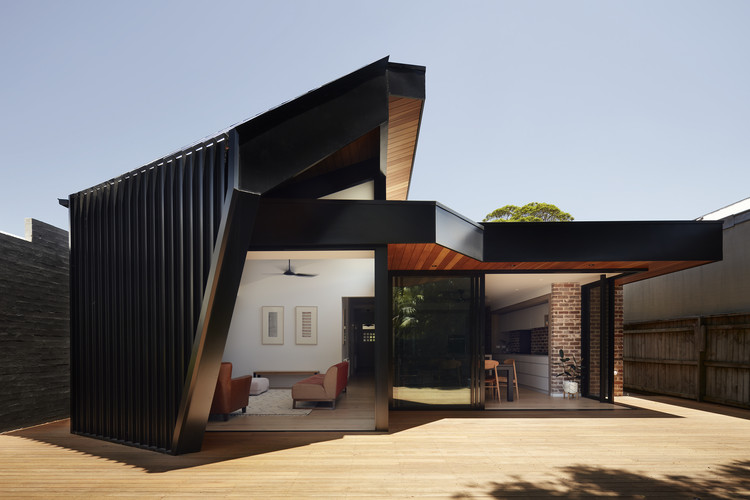 Text description provided by the architects. This house is located within a heritage conservation area within the suburb of Hunters Hill, close to the centre of Sydney. The site and surrounding properties are typically freestanding homes on medium and larger sized garden blocks. The existing house is an exceptional example of an Australian period home circa 1927.

A 1980’s renovation existed to the rear of the house which did not fit the current owner’s requirements and expectations of family moving into the future. The primary brief was to create a more modern, open plan layout to the rear with some modification to the existing internal bedrooms to the front. The neighbouring home has a position so that the entertainment area backs directly onto the rear of the subject property, creating a privacy issue for both dwellings.

The concept of a “blinker” between these two zones was discussed which assisted practically the division of these two areas creating privacy and also leading to an architectural direction of the rear façade. Due to the width of the rear addition and requirement for sun amenity to push into the new open plan area, highlight glazing was introduced to achieve adequate solar and ventilation amenity to the living spaces.

It was intended that the existing brickwork that was being removed was to be re-used within the build to give texture and a historical reference point to the new addition to the period home. Certain period features were reinstated and refurbished throughout which emphasised a legible contrast between old and new.

The palate of materials used were textured, classic and functional reflecting a modern style of living, though respected the old. The connection of old to new although legible is seemingly subtle where the modern open plan space to the rear blurs the lines from inside to outside capitalising on a modest yet green rear yard.