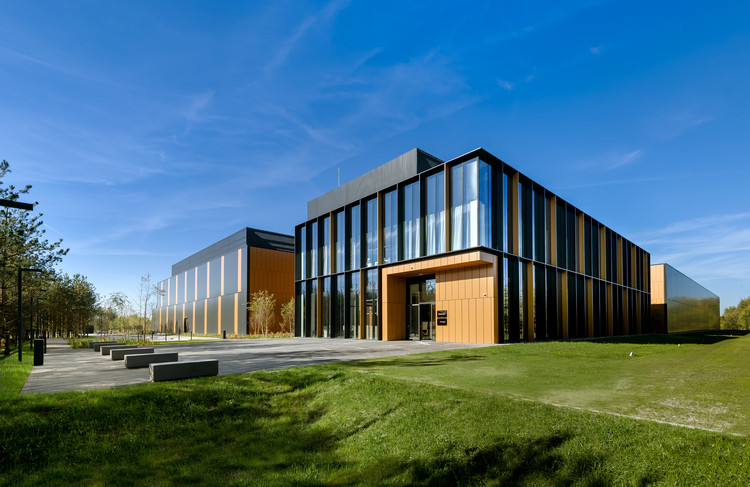 Text description provided by the architects. The Design Project of headquarters building of BIALMED pharmaceutical wholesaler breaks a stereotype of a typical warehouse design time fulfilling a task of blending an enormous structure into a green landscape of Masuria district in Poland at the same. The design becomes almost a natural part of the  surroundings.

The attempt to merge industrial architecture with nature may seem strange at first, but both – the Client and the Designers made this a priority in the design process.  Greenery , nature and sustainability were the most important theme of the project - not only when it comes to  building architecture, but technical installations as well. The building itself is heated by heat pumps, while electricity is gained of photo-voltaic cells.

One of the very first decisions was to retain the pine forest, located in the southern and eastern part of the building site. Thanks to that the building gained a natural isolation from busy Warszawska Street. What is more, the area connects to neighboring meadows and forest from other sides.

Second important decision was to bring greenery into the building itself and literally pour the landscape into the floorplans. It is achieved by two patios cutting into the building volume which not only invited nature inside, but also helped to divide the structure into smaller shapes and reduced the scale of the building.

Greenery also became an important part of the design of the building surroundings. Wherever possible pavements and roads were designed as green surfaces, with decorative grass compositions, arranged into stripes, connecting patios and nearby forest. The maneuvering area was surrounded by plantings, with trees scattered in a nonchalant way, giving an impression of natural forest, separating the paved area from the meadows.

The theme of greenery, grass, wood and Masurian stones can be found in every single detail of the building, appearing  not in a literal way, but rather as a subtle modern approach. Natural tree located in the center of the foyer is the final definition of the connection between architecture and landscape.  It is a direct  link between the built and natural environment – the new and the existing.

Even vertical elements, that can be found on elevations of both – the office building and the warehouse area are reflecting shimmering pine forest. Long and horizontal warehouse volume is divided into vertical multilayered panels, while the office building has a slim, vertical fins with facade glass underneath, in proportions of 1x6m, per sheet of glass. Even the roof screens, covering  the machinery and installation units, have been divided vertically.

However, in order to break the scheme and to create one and cohesive ornament that links elevations of the warehouse and the office building, brown/gold panels were slightly shifted in relation to one another, since nature never was and never will be perfectly and precisely spaced. BIALMED - where nature meets architecture, creating one, consistent organism. 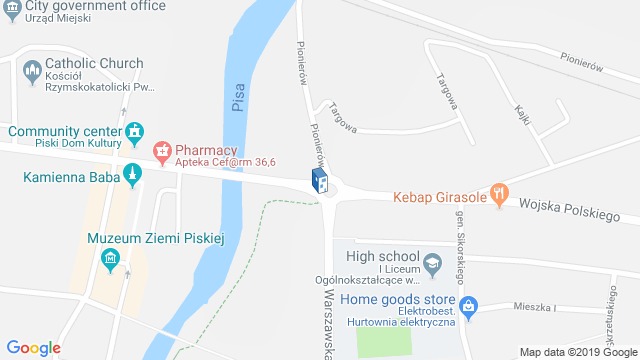