Anti Reality has designed a summerhouse for rocky coastal areas, seeking to engage with open surroundings. The one-story house with panoramic views of the sea was designed with seasonal recreation and rural retreats in mind. At 85 square meters, the triangular-based layout is divided into two principal parts: a living space, and a rooftop swimming pool.

Perched atop a rocky slope, the triangular layout features a central living area with an external passage, surrounded by three “cores” containing a bathroom, kitchen, and bedroom. These cores are situated inside an open multifunctional space, with small oval rooms constituting the only permanent element in the interior. The living area is determined by a mobile panel wall, allowing one to freely arrange the living space, and adapt to the current needs of its user.

Similar to the interior, the roof space is panoramically opened up to the surrounding landscape. Reversing the roof structure allows for the creation of a swimming pool, the level of which is controlled by a siphonic drainage system. Roof outlets located over the three structural cores allow water downpipes to be led through the building interior to an inspection chamber, allowing the water level to be controlled or completely drained. 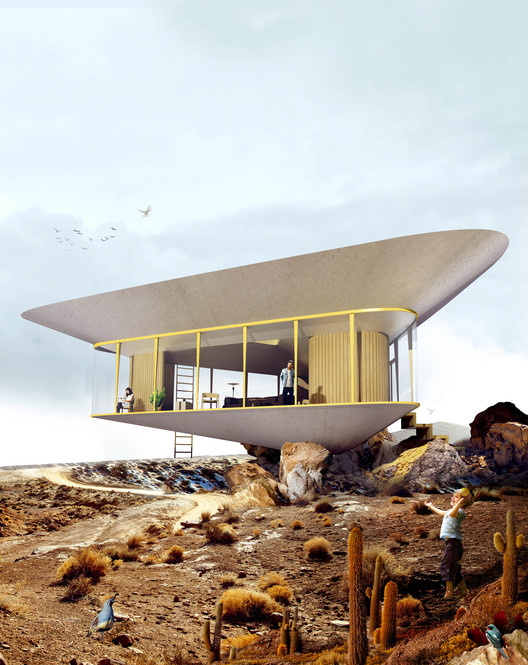