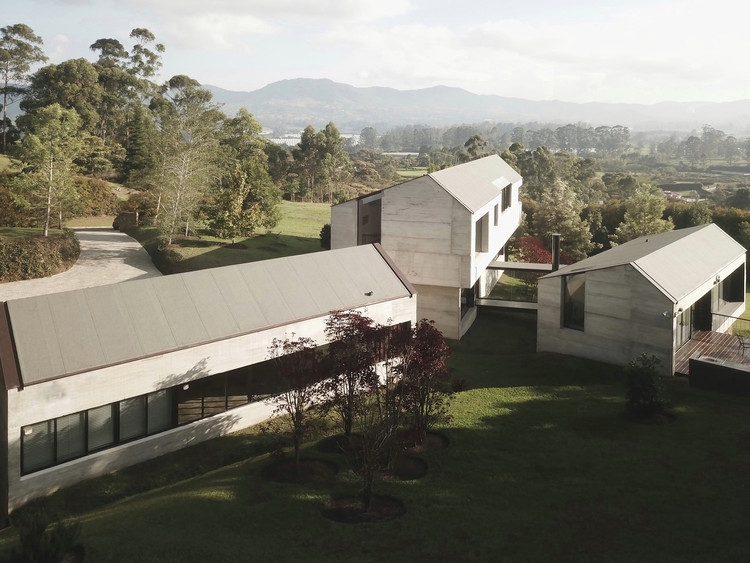 Text description provided by the architects. When we visited the land for the first time, we saw a series of specific details that we liked a lot, such as the presence of a forest with native species and the natural shape of the land on which the house was to be built. We decided from the beginning that the topographical form should be preserved in its entirety without any alteration.

he natural slope and ditches where the water runs in the rainy season were the morphological characteristics that would not be modified, on the contrary, it made us think that the spatial scheme of the house should be from three volumes connected by bridges . So the terrain would remain the same. Once this path was found, we did several explorations to work the architectural program according to the volumetric fragmentation. For the inhabitants of the house this idea of having spaces connected by bridges, but at the same time totally independent, they found it very interesting, above all, to change the relationship with the landscape and space in very short distances.

Another important aspect in the configuration of the geometric shape and the materiality of the house was the climate. The region in which the house is located, usually has temperatures that can be very low, especially at night. We decided to make a careful handling in the proportion and location of the spans in the 3 volumes looking for a thermal equilibrium. The openings sometimes continue up to the roof, perforating the inclined plane to achieve effective light inputs and create specific glances on some neighboring hills and the nearby forest. This house is a small piece of concrete carved to the measure of its inhabitants and the landscape that surrounds it.