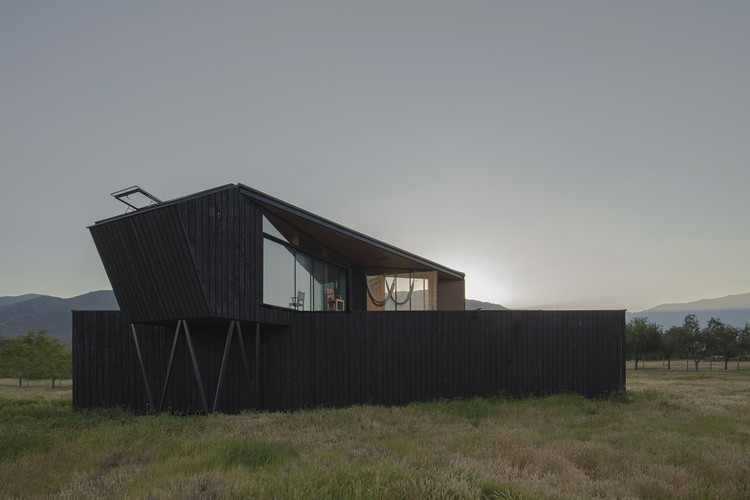 Text description provided by the architects. Stand-alone house located in the rural commune of Lampa, located on the northwest side of Santiago, Chile. It's hermetic and open at the same time. The first floor closed around its perimeter and contains two courtyards at the longitudinal ends of the house. Between them is a common space for the kitchen, dining and living rooms, this configuring a linear and successive space between three continuous situations that are always connected with both courtyards, creating an interior composed of an interior, intermediate and exterior spaces.

There are an access patio and a service patio, which also function as a winter patio (north), and a summer patio (south) respectively, due to the suns position they face and the location temperatures. The second floor is a private space for the bedroom, but at the same time, more exposed to the outside. It’s connected to two terraces. To the south, a small one that could be rather used as a balcony, and a large one to the northeast. From these balconies, you can see a near and distant landscape of hills surrounding Lampa, as well as Walnut plantations to the South and large rocks to the East.

A skylight window over the bathtub in the bedroom, allows you to see directly into the sky, illuminating the space overhead. Both levels are connected by a staircase of 120 cm, allowing different views to the outside. All this response to the routine of one who lives in this house.

Formally the house is understood as a rectangular and closed bar, that can be interpreted as the plinth where the second floor is transversely supported and opens to the whole context thanks to the height gained by its base.

The house was constructed by a mix of wood joinery for pillars of foundation, beams, internal and external partitions, coatings and floor; Sip panels for first floor slab and perimeter walls of the first and second floors, and finally, steel for the floor and cover structure of the second floor and pillars of the volume flown from the bedroom.