Text description provided by the architects. Joyze Hotel Xiamen, Curio Collection by Hilton is located in Zengcuo’an, Siming District, Xiamen City, with Dongping Mountain in the north and coastline in the south. Zengcuo’an has long become a safe haven for Xiamen's foreign trading ports, remaining the traditional fishing village texture. Thus, designing a select hotel in such an area with significant site traits naturally lays emphasis on the continuation and development of the local culture.

In order to maximize the use of space and to gain best landscape orientation in such a compact project site, the hotel rooms are arranged in a north-south orientation according to the road coordinate system. The hotel's standard rooms are concentrated on the north side of the site, becoming a 6-story "L" shape building, and are further dismantled into six smaller-scale boxes. The villa rooms are three-storey single-family buildings, arranged regularly on the south side of the site, as far as possible away from the city's main roads, reducing noise interference. The settlement architectural layout creates many small-scale public spaces: courtyards, streets, and sky gardens. The buildings look like a miniature fishing village.

Abandoning the straight-away way of entering the hotel lobby, the design of hotel entrance adopts subtle spatial sequence logic of the southern Fujian Mansion: from the open urban area to the semi-private street space to the private courtyard. To enter the hotel, guests will be guided by walls, through the bamboo forest, into an aerial gallery on the southwest side of the site, and finally open a door of several meters wide to reach the hotel's bright and open lobby and cultural display area, realizing a multi-level space experience.

When it comes to the treatment of the façade, the traditional architecture of southern Fujian has widely adopted the method of “bricking into the stone” which constructs walls with the staggered stacking of different shapes of stone, red brick and rubble and produce abundant visual effects with material changes and splicing. The design of Joyze Hotel Xiamen, Curio Collection by Hilton adds metal element medium, combining bricks and stones to form points, lines and faces.

The "flower window" of the room is enclosed by a low-light metal floating board, and a gap is opened in the longitudinal direction, so that when the overall illumination is on at night, a little bit of light leakage occurs above the notch, forming “points” on the façade.

A series of "empty boxes" of various shapes are implanted in the gap between the tops of the various slopes of the building and the south side façade, and the linear boundary of the space is defined by the metal aluminum plate and the vertical grid.

On the whole, the building façade is divided into two levels in the longitudinal direction: the first and second floors of the building adopts the light brown dry hanging stone, and above third floor, façade is sprayed with light gray paint while a narrow metal aluminum plate acts as a connection node of the transition of two levels. 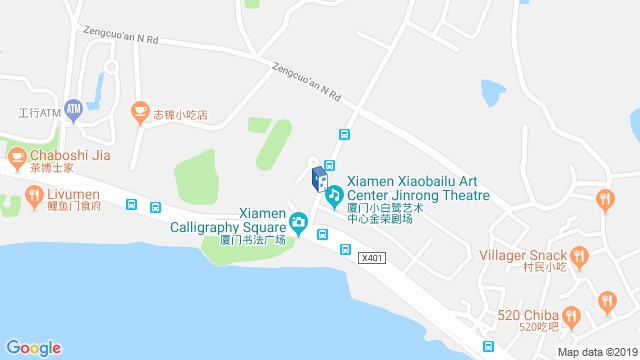