Text description provided by the architects. One Room Tower is a small addition to the architecture of the City. It is intended as both an urban artifact and utility, designed as a robust and adaptable set of subspaces within an independent singular volume. One Room Tower has presented a counter position to the current local default of raising and infilling under Queenslanders or the various acts of extending character houses. Instead of presenting a model (type) for greater density by offering a genuine opportunity for diversity of occupation within existing lots within the texture of the inner-city suburbs of Brisbane.

As a Practice and collective, we value permanence ‘continuity’ within the urban condition. One Room Tower seeks to cultivate a sense of relatedness to the Rossiian idea of the ‘collective memory’ of the surrounding enclave, rather than prioritizing the specific relationship to the adjacent house. The form and exterior of the Tower respond to the prevalent local typology and fabric by the making of an affirmative architecture which displays familial characteristics, scale, and materiality.

The interiors are an invention and demonstrate the spatial and structural intelligence learnt from examples in the Metabolism movement, coalesced with the raw tectonics of the Queensland lightweight timber vernacular. Key to the project is the exploration of the core and its relationship to the peripheral frame. A consecutive series of living platforms spiral vertically up from the grounded entry ‘doma’ up into the coffered roof space. Each platform spanning between core and frame creating a sequence of uniquely scaled spaces located within the one volume/room.

A quartet of triangular courtyards, created through the subtle shift in the geometry of the tower away from the orthogonal street grid affords immediate connections and privacy and inflates the interior scale.  The posture of the Tower generated by the orientation within the street asserts its independence and autonomy. The tower is connected via a breezeway to the house while also maintaining its own side street access. Ultimately it is designed as an adjacent ‘neighbour’, a complementary living cell rather than an extension of the existing. Phorm architecture + design wishes to acknowledge the unique collaboration with the Silvia Micheli and Antony Moulis on the project. 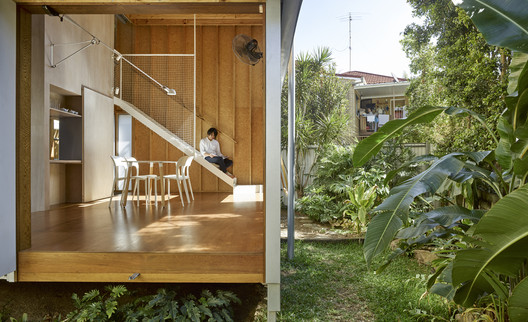