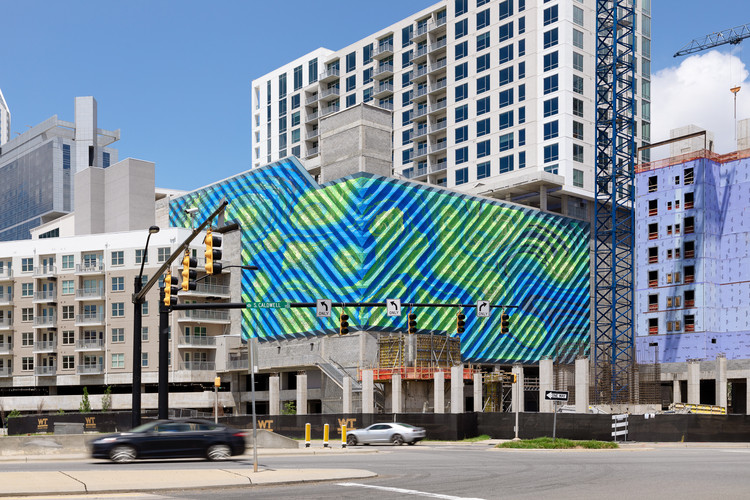 Public art at the urban scale. The dynamic pulse of Wanderwall re-imagines an exterior parkade wall in the uptown core of Charlotte. Evocative of swirling activity—ecological, social, and economic—the folded metal facade describes elements of flows and networks, with a labyrinthine porosity that allows light through to the garage interior. This dimensional architectural skin is composed of 5,768 individual parts that wrap the South and East elevations of the Stonewall Station parking garage. Eight stories of vibrant aluminum cladding announce the building as a beacon on the Uptown skyline and produce several scales of experience that extend far beyond the building itself.

Scales of experience. In a flash of blue-green caught from a car traveling on I-277, the piece acts as a colorful signal, inspiring a moment to slow down in the city. The Sunday stroller may catch a glimpse from several blocks away, tempting a diversion from the usual path. Along the approach, color gives way to the pattern. The surprising non-linearity of the piece rewards curiosity with ongoing discovery.

The mid-range view provokes a visual exploration of the facade's motif. Aluminum parts in saturated hues from royal blue to springy green fold into a maze-like pattern, revealing an image of swirling activity. The composition is meant to appeal to a wide range of demographics, triggering different associations and real-world references. From this vantage, a phenomenon of “visual wandering” transports the viewer. As the eye travels across the piece, you find yourself lost in the design, the push and pull of the pattern, its color, porosity, and depth.

Up close, Wanderwall is a tectonic experience. Looking up from the street below, details come into focus. Here, you can perceive the depth of the surface—up to 16 inches in places—and its intricate connections. The effects of the pattern at this scale intensify on the interior of the garage. The porosity that patterns the exterior produces a tracery of dynamic light inside. A maze of rich gradients of several colors offset the dominance of surrounding glass facades, bringing a proud, unique emblem to Uptown Charlotte. For residents of all kinds, Wanderwall is a new landmark that anticipates the city’s bright future. Rather than a static fixture in the city, it produces new moments of discovery with each visit, prompting you to return again and again.

The motif. Charlotte is recognized as the second largest financial center in the nation, given its concentration of financial institutions. The overall motif of the facade visualizes that activity and the growth it has produced in the city as a density of nodes with fluid exchanges circulating between and beyond them. In expressive metal parts, these flows take on a gradient coloration that accentuates the circulatory dynamics of the system.

As the greens shift into blue, the pattern begins to evoke the natural. The vertical layering of the labyrinth takes on a quality of geological strata—formations that speak to the landscape lying under and beyond Charlotte’s urban core. Porosity is further derived from striating parts and the way they come together, providing both ventilation to the building and dramatic light filtration.

System. As a novel approach to facade systems, Wanderwall doesn’t use any secondary structure, but hangs as one continuous piece on the building. Unlike typical panelized systems, Wanderwall’s skin is assembled onsite as a unified, ultra-thin surface. As a structural nappe—a term that comes from geology to describe a sheet of rock draped like a cloth over a fault—it assumes a gentle pleat that provides the structural depth for the 1⁄8 inch material to continuously span both elevations.

While the city of Charlotte continues to flourish, Wanderwall shares the spirit of growth as a new public asset. As one of the largest public artworks in North Carolina, the project unifies art and architecture to provide access to art at a broad scale and to change the character of the Uptown neighborhood for its residents current and future. 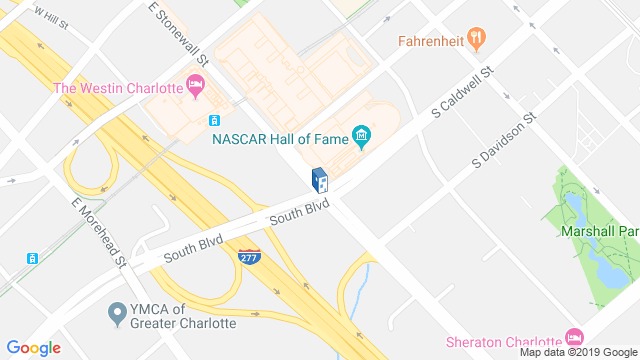