Over the timespan of just one generation the planet’s pace of urbanization has dramatically increased. Through these dynamics and its resulting environmental threats, new challenges have emerged that deeply question the validity of the post-war planning paradigms. Dominant ideologies have been replaced by a problem-solving attitude, increased economic pressure and an urgent quest for evidence. What impact does this have on the work of the urban designer and planner, and how can the profession prepare for the future?

Designing Change tries to answer these and many other questions through in-depth conversations with 12 leading practitioners in the field. Conceived as an unpartisan contribution to the discourse about the future of the built environment, Designing Change offers an unorthodox combination of case-study analysis and theoretical debate. It addresses the topic’s complexity through a rigorous focus on process, client relationship and development initiative.

FINN GEIPEL (LIN), Berlin - The Emergence of a New Type of Urbanity

ELIZABETH PLATER-ZYBERK (DPZ), Miami - A Recent History of Zoning and Design Codes in the US 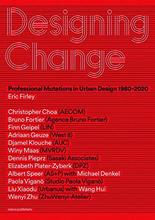