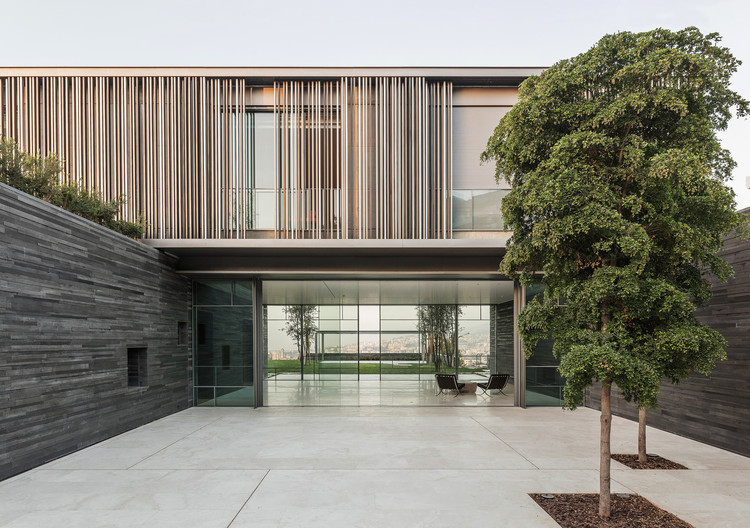 Text description provided by the architects. Sheltered behind a basalt wall, this horizontal box of a house unfolds in a processional transition from the busy outer world to the serenity of the main garden, with its views of the mountains beyond. The clients’ requirements were specific, with a detailed brief.

Their move from an urban apartment to a landscaped house with a garden set a challenge of creating an overlap of functioning coupled with a need for compactness and added security. The challenge was to capitalize on the benefits of the site as well as economizing on the circulation spaces, creating as few corridors as possible. The house faces a road on the south, the client’s father to the east and his brother to the west.

Set delicately on its base, the louver-clad upper level of the house is given over to family needs and contains a series of bedrooms, bathrooms and family spaces that cantilever over the level below. Due to the proximity of a road and to maximize the garden and several nearby structures, the cladding not only functions as a sunscreen but also as a living skin opening and closing where needed and shading from heat.

The initial point of entry downstairs is accessed via a gently sloping walkway from the main entrance above, which opens onto a succession of formal spaces with 4.20-meter high-ceiling organized around a broad courtyard garden. Expansive sliding windows give directly onto the patio area and when opened on both sides of the main living room, facilitate an indoor/outdoor lifestyle.

It is down here that family life takes place. An open layout creates an easy flow but also discreetly funnels guests past the access to the upper level, maintaining the privacy of the family-only areas.  By occupying the terraced walls of the ground floor with the louvered box set on top of them, the house paradoxically reads like a long single platonic floor volume, shielded by the tall trees around it.

Thick basalt stone walls with deep openings, Low-E glazing, and planted roofs work to stabilize the temperature inside and absorb the climate extremes, leading to an improved quality of life paired with a reduction in energy consumption. Sustainability is enhanced further by collecting the water that is filtered to be used domestically as well as for irrigation. Solar collectors are discreetly laid on the roof, providing hot water all year round, while photovoltaic cells help reduce electrical consumption. 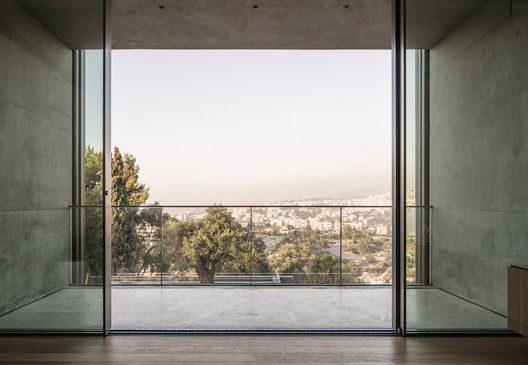