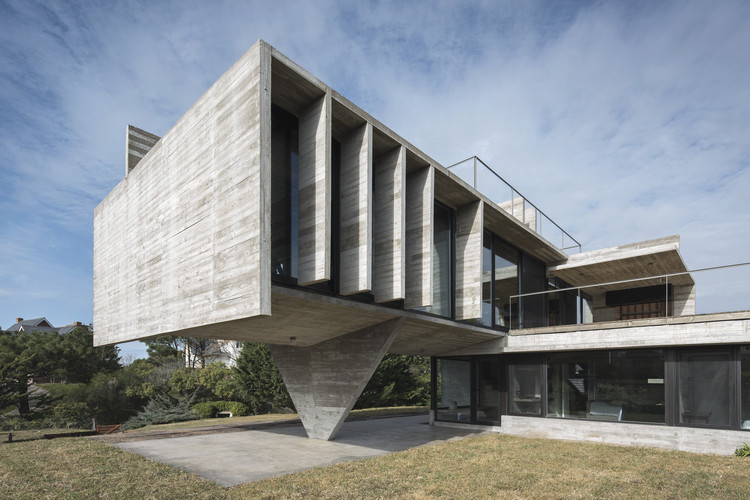 Cariló is an Argentine town in Pinamar, a district in Buenos Aires Province. It withholds a natural pine forest reserve, dunes and extensive beaches which led Cariló become one of the most important touristic centers and an ideal place to live, 360km away from the City of Buenos Aires.

The house is named after the town it is built in. It is placed on a corner lot one block away from the sea. Its proximity to the beach makes a less leafy and more arid scenery, which encouraged us to intervene the landscape. A steep slope descends from the back of the terrain, just like a dune does towards the sea.

The commission consisted on a vacation home including a master suite connected with a social area, an independent guest area, an outdoor lounge, a barbeque area, a swimming pool, and a solarium. The clients emphasized the importance of landscape views and the protection from the cold South-East winds from the sea.

In order to fulfill these requirements, the house was placed on the highest level of the lot, three meters above the street level. The principal areas were disposed on a platform supported by the guest and service area, flying over a parking space. This disposition results in two separate volumes connected by a vertical circulation.

The main platform -with side to side views and glaze paneled from floor to ceiling- overlooks the sea on one end, and on the other to its private garden -designed by the client, as she is a landscaper herself-. While the ground floor has views of the garden too, its windows are more constrained to ensure its proper temperature control and privacy.

The social area expands towards a wooden deck. On its semi-roofed section it is located the barbeque, an outdoor lounge and a dining area. In its uncovered space, the solarium lies at the edge of the swimming pool. From the deck, overlooking the garden and sheltered from the wind, the sunset can be contemplated framed by the surrounding trees.

The landscape can be appreciated looking over the neighboring houses from the terrace, designed on top of the main volume. The stairs, contained by two concrete walls, lead to an intimate space containing one concrete bench: your own private lookout from where to observe the sea.

The structural wall that helps organize the barbeque area protects the semi-covered deck section and the sitting area from the horizontal sun rays coming from the West. Likewise, concrete screens hanging from the first floor slab, shields the master bedroom from the sun and filter the views from the deck.

The guest and service volume rests completely over the terrain while it supports one of the ends of the main volume. One of the main challenges was to find a solution to the structural support of the other end. It was decided to concentrate the whole load of the hanging volume on one point: a triangular column. As its conic section would decrease in size towards the ground, it would liberate the floor plan –unlike most traditional solutions-. In addition, the slab hides a beam inside its core which runs all along its length.

This structure works as an I-beam in which the lower wings rise until they reach the borders of the slab avoiding frontal beams in sight.

The master bathroom, the only closed space over the principal platform, articulates the sleeping and living spaces and at the same time takes a structural role by transmitting its loads to the triangular column below. For its distance from the glazed panels, it takes in sunlight from a dome light that works as the bench on the terrace’s lookout.

All framings were materialized on dark bronze anodized aluminum in an attempt to render them invisible and deepen the contrast between the emptiness and the color of the concrete that surrounds it.

On both longitudinal borders, without visible lower beams and to the setback of the upper inverted beams, the framings are given free ride to run from one end to the other. A lighting rail runs linearly on both facades, reinforcing the volumes’ horizontal proportion.

It was essential that those who inhabit Carilo House can enjoy this balsamic place with all their senses. It is hard to separate the stoutness of the built object and the landscape´s sensitivity. The term landscape recalls our objective in this and every other project: the coexistence between the house and its surrounding nature.