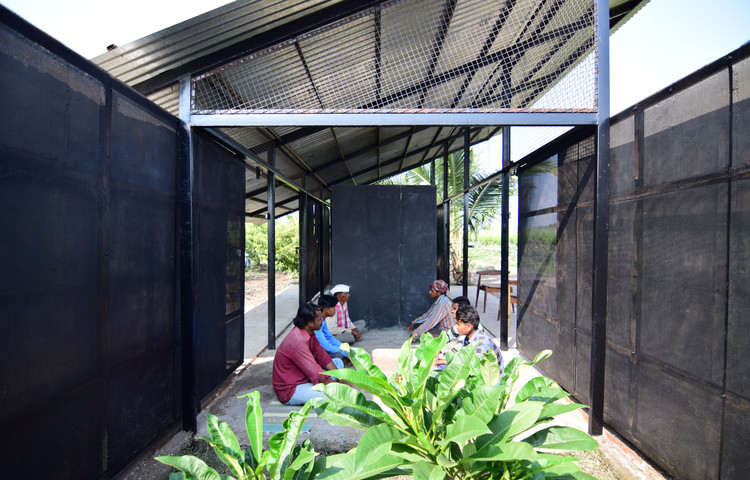 Text description provided by the architects. The site is located at Pohegaon in Ahmednagar district of Maharashtra. The client approached us to design a shelter where one could have food and rest for a while. Evolution of this design started with understanding and evaluating various contemporary ideas for dwellings with multiple activities in the region. As this shelter is rendered to derive a unique identity for the dwelling and it is to be associated with multiple activities like storing, packing and selling goods cultivated in farmland, cooking facilities and providing temporary shelter for laborers working in farms with needful services.

In the beginning, a survey was conducted to find the house form of the region. This resulted in us to understand the evolution of house form from Dhaba (mud slab) house with verandah to Present day gated bungalows (exclusive artifacts) and low-cost shelter typology built in concrete and tin roof.   After this survey of existing houses and their technology of construction, it resulted in us to make use of thin concrete wall with metal pre-fab skeleton lined with the galvanized roof.

Talking about these shelters, currently, they consist of a dwelling (to stay) with semi-open space attached to it. But there is no connection between both spac­es. This resulted in disintegration in terms of activities in these houses. The whole process of design started with the question: What should be the nature of the design assembly, which will accommodate a temporal character and will occupy various numbers of people?

In search of a typological prototype, the key elements of buildings like a base (platform), skeleton (metal framework), roof (corrugated GI sheet) and skin (concrete envelope) are generic materials, which formed, in a way as a design tool and design regulatory principle. While executing the idea of dwelling for tomorrow, the envelope is separated from the skin, which has created a gap to form the visual connection and physical connection with the surrounding. The security is taken care of by the perforated gate, which allows an uninterrupted visual connection. A utility and cooking space is accommodated in the center of the shelter, which separated the living and resting area. Where living space function as multiple spaces, dynamic in nature with the activities. It further extends to the court formed by the separation of the concrete envelope. While in the resting area court function as a connector between resting space and washroom.

This place is influenced by old regional typology proposed on land parcel availed by the demise of trees. Manifestation began with the proposed block, which houses two spaces- living and resting which extends in court with concrete envelope around and a pantry in the center. Design evolved contains a narrow linear space, where verandah wraps around living block, which connects farm on both sides. This forms an identity of an assembly of house form termed as, ‘living –verandah’.