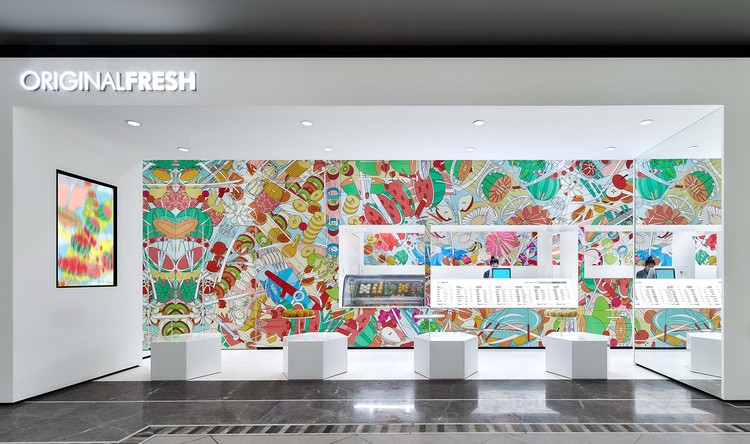 Text description provided by the architects. ORIGINALFRESH The Grand Summit Beijing is the third shop Drawing Architecture Studio (DAS) designed for this juice brand. The site is featured with a wide façade and shallow depth, which inspired DAS to associate the concept of “Billboard Architecture” from the 1960s and the present “Instagrammable” culture on social media, rethink the relations between architectural drawing and architectural design, and ultimately realized a flattened design for the shop.

In his book Learning From Las Vegas, American architect Robert Venturi raised the concept of “Billboard Architecture”. The giant façade of the architecture could be used as the carrier of images (billboard) to convey information. At that time, it was a result of the era of automobile plus highway. The commercial logic behind it is that the image should be big enough so that people could see it in a very long distance and fast speed. Today, the giant façade can still be the carrier of images, but the way how information is transmitted has changed. People use cellphones to take photos with images (billboards / architecture), and share the images of the images (billboards / architecture) via online social media. Its commercial logic is that for the images being big is not enough and they must also be attractive enough so that people would love to take out their cellphones and take selfies in front of them.

In the design of ORIGINALFRESH The Grand Summit Beijing, DAS tries to adopt the same logic into the shop design. The roughly 12-meters-long and 4-meters-high façade is filled with a huge mural called Cutting Fruits. The thickened doorframe becomes the frame of the mural. The 5-meter-deep shallow and long space is divided in two. The front area is used for sale and the back for production. Three big windows are created out of the mural to connect the two areas. The images cut out by the windows are moved to the walls of the production area in the back so the mural looks complete from the façade of the shop. The staff and customers walk through different layers of the mural. All the other elements, pillars, walls, and furniture, are all kept simple with white painted or mirror surface, which is to bring out the giant “billboard” Cutting Fruits. Billboard architecture is internalized as billboard interior.

The mural Cutting Fruits itself is a piece of fruit-themed architectural drawing. It explores in depth one of the most important techniques in architectural drawing – section. Each fruit and part in the drawing is an experiment about section. Through the design and combination of blazes, the fruits are cut into various forms, added with motion lines inspired from comics that indicate speed and movement, and altogether made into a drawing of great complexity and clear logics. Here, what to be designed is not the subject of section, but the section itself. With such an exploration, DAS tries to demonstrate that architectural drawing is not a drawing subject, but a drawing method. It is exactly because of the unique techniques of architectural drawing that some extreme images which cannot be achieved by other drawing methods can be created in this mural. The ceiling-high mirrors on the two sides of the mural also create a horizontally infinite visual extension for the image which reminds of No-Stop City by Archizoom. Such spectacular visual effects attract the passerby to stop and photograph.

By creating a huge mural to dominate the interior of ORIGINALFRESH The Grand Summit Beijing, DAS is able to explore the possibility of combining drawing and architecture in one design. This case is not only a contemporary practice on the classic architectural concept, but also a positive response to the huge demand on images due to people’s obsession on social media. To DAS, even if the design of the space takes an extremely flattened approach with images as the core, it still contains the essential spirit of architecture since the image is based on the unique techniques of architectural drawing. 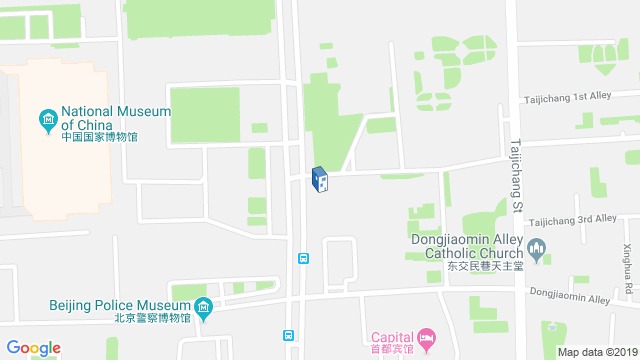 Location to be used only as a reference. It could indicate city/country but not exact address.
Share
Or
Copy
About this office
Drawing Architecture Studio
Office
••• 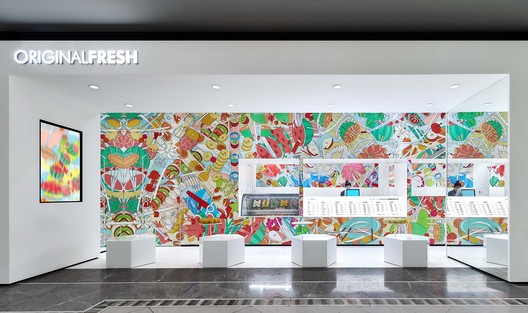