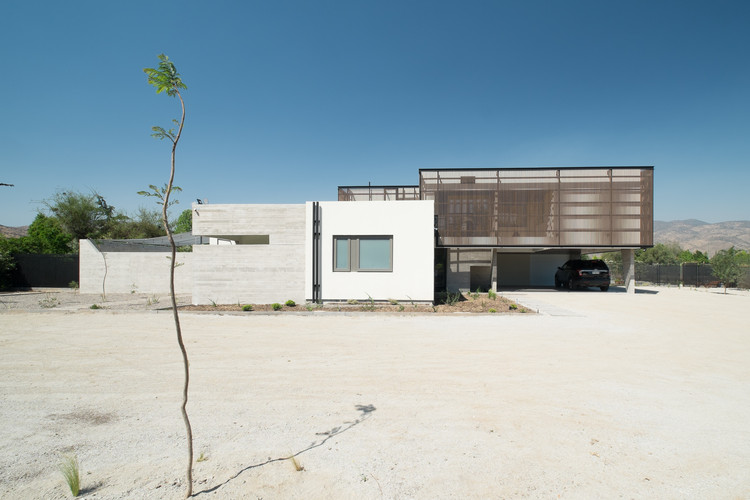 Text description provided by the architects. This house is located in an old sector of Chicureo, municipality of Colina, has a big terrain, which provides freedom of design in terms of the layout and orientation.

From the above, the real challenge is to achieve greater control and efficiency for external factors; as the great thermal oscillations between the seasons of the year, solar radiation, pollution and intrusions of third parties to the property. All this without sacrificing spatial quality, functionality, luminosity, views or ventilation.

The house is arranged crosswise to the ground, orienting its main facade towards the west, which also faces the street.

This façade is made up of walls that are rather hermetic and, very controlled windows, and protected from sunlight after noon; besides minimizing the views from the street.

Contrarily, the east façade opens almost completely towards the garden projecting views of the hills and their natural environment.

The main volume already described, at the time, is composed of 4 secondary volumes, each of them is responsible for a specific role, complementing the project as a whole.

The first corresponds to the first level and is made of reinforced concrete, solid and with great thermal inertia. In charge of containing the most "public" enclosures. It is a unique space, where the divisions between programs are given by furniture in work of half height and folding or sliding paraments that give a flexibility in its use.

The second is for services and facilities, also located on the first level in the west zone, protecting the adjacent public spaces.

Another volume corresponds to the complete second level, containing the entire "private" program of bedrooms and bathrooms. This is characterized by being a of low mass construction but with a high thermal insulation.

All its contour is accompanied by a double skin with foldable paraments, which allow to protect and sift the solar radiation, as well as providing greater security, since all its perimeter are unfolded, it does not allow the access of an external person.

This structure is suspended by cantilevered metal supports that contain the mechanisms and that hold individual slats of natural wood of 4 meters high vertically arranged around the perimeter of the volume. These are responsible for sifting 50% of the ambient light (which in practical terms is not perceptible) and from 50 to 100% of direct solar radiation, depending on the angle of the incident light, given by the position of the sun in different seasons of the year and time of day.

The above is complemented by a passive circulation and extractions air system in a ceiling, from programmed gates type “freecooling".

The fourth and last volume corresponds to the core of vertical circulation, (scale box) that in addition to its obvious function of connecting programmatically the 2 levels, provides much of the natural lighting to the house. Being recessed with respect to the volume of the second floor, generates a protection from direct radiation and allows only indirect light to pass through.