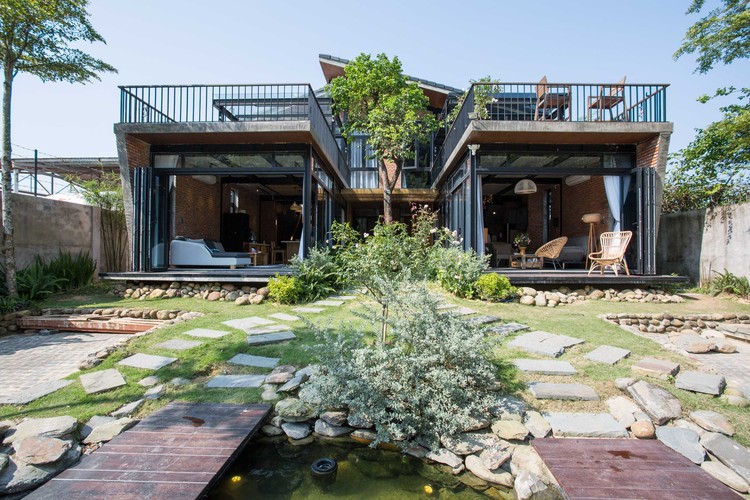 Text description provided by the architects. This is the most fascinated project up to this point in my life. There was two middle aged couples came to me for advising and designing a duplex, which will be a home for their two families. They are friends of each other, and they are so close that they want to spend the rest of their life together. Therefore, they decided to they decided to buy a piece of land, build a house on top where they could share the ups and downs in life.

Both families love nature, forest, mountains and specially Sơn Trà peninsula which is the natural treasure of Đà Nẵng city. Sơn Trà is the proud of the city for its great biodiversity and it is the the home of the Red-Shanked Douc Langur  (scientific name - Pygathrix Nemaeus), one of the world’s most precious and colourful primates. Every day, the two families drive up the peninsula to admire and explore its nature. They became very attached to such enchanting area and they bought one piece of land right by the slope of the base of the mountain to settle a home and to fulfill their desire.

The plot is 380 m2 in total with 40% of permitted construction density. The client demanded a fairly simple house, with minimalist structure blending harmoniously with nature. While the exterior design look like one single house from the outside; two family can live separately with private area and share the common space in the inside.

We agreed on a design which used mainly steel and raw bricks. The house is divided into two different area, with similar functionalities and amenities, completely separated, symmetrical through a garden in the middle. The garden plays a role of a intermediary space between the two houses as well as the main entrance; Meanwhile the the exterior of the whole building gives the illusion of one single house.

Ground floor: Contains the living room, kitchen and a bedroom, all connected to a spacious garden area, accessible through sliding glass doors. With this solution, the atmosphere will feel more spacious and close to nature. When the glass doors are fully opened, the indoor area and the garden area seamlessly blend together as one, allowing you to fully immerse into the mountain and forest climate.

First Floor: Contains a large bedroom and a spacious terrace equipped with a glass roof. People can see the Sơn Trà mountain directly from the bedroom as well as the terrace which gave them a seemingly feel as if they could touch the forest.

After moved into the house for a while, the two families express their joy and fulfillness for their new home. They told me about their experiences in the morning that waking up full of energy, breathing the fresh nature air and in the afternoon relaxing and observing monkeys playing by the edge of the forest. At that moment, they look truly content. 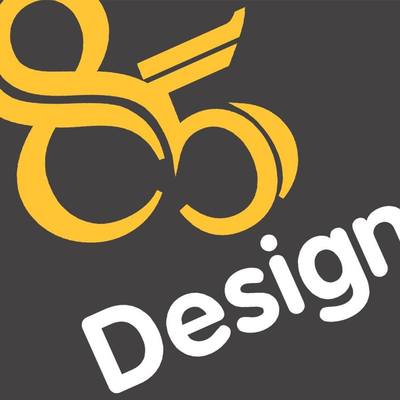 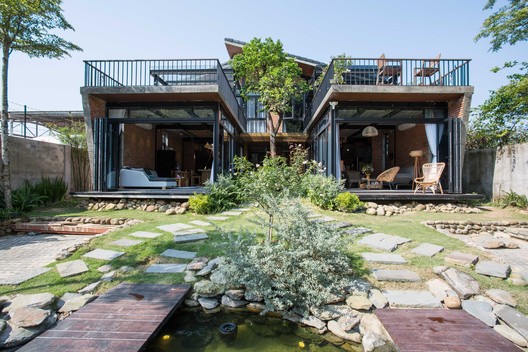