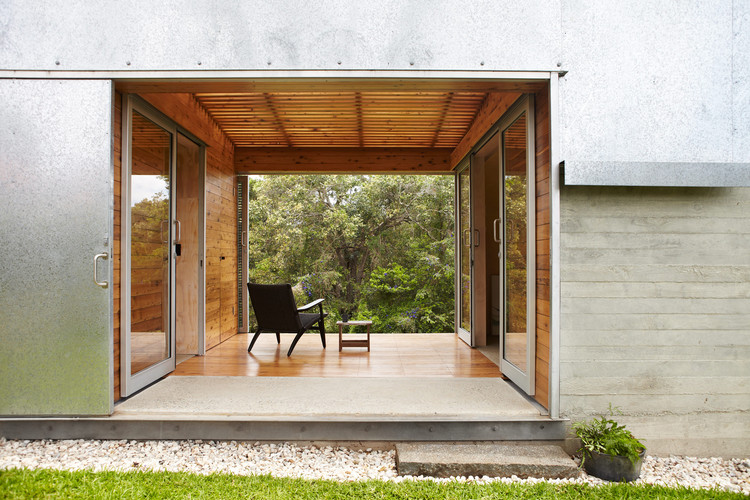 Text description provided by the architects. Keperra is a post-war suburb North West of Brisbane CBD, once occupied by the military camps in the 1940’s and later with the development of Housing Commission in the 1950’s. The brief to add a detached sole occupant flat on the existing property presents an opportunity to rethink the typology of the secondary dwelling, commonly dubbed as the ‘granny flat’. The client’s downsize move to this new dwelling means the existing house is able to yield additional rental income.

Positioned along the rear boundary of the property, the new structure displays a defensive Southern facade to form backdrop to a mature Jacaranda tree. The central covered deck space establishes ground connections with the newly defined garden while serving as an arrival court. This punctured void in the massing sets up a framed view of the landscape for the garden and the existing house. The dwelling is deliberately made to open up the Northern facade on to the natural settings of Kedron Brook creek reserve. With the footprint kept at a minimum of 45m2, the small spaces amplify the sense of dwelling in nature. This rare edge condition between site, suburb and parkland has the potential for the occupant to have a connection with the daily activities of the parkland life.

The elongated plan is paired with generous openings that extend the interior to the landscape beyond, while screening devices allow control of privacy from the occasional parkland strollers. A string of three connecting rooms essentially makes up the plan: living, semi-outdoor and sleeping. Each designated with an individual framing of expansive, intermediate and protected views respectively in response to the undulating landscape. These composed and at times oblique apertures enhance one’s sense of openness, immediacy and intimacy. The semi-outdoor deck is the main breakout space and designed for the occupant to circulate across on a daily basis, it heightens one’s awareness of the changing environmental conditions.

Robust construction detailing are utilised throughout the project, and resilient materials are used primarily in their raw state to deliver a low maintenance dwelling within a constrained budget. The chiseled, board marked in-situ concrete has a rock like quality, emerging to form anchorage to the sloping land. Capped atop by the sharp edged galvanized cladding, its surface subtly reflects the seasonal color transition of the surrounding foliage. The oversized folded galvanised gutter also doubles as a sunshade device over large Nothern openings.

Internal spaces on the contrary display a sense of warmth and softness, with the use of materials such as locally sourced Cypress Pine and Hoop Pine plywood panels throughout. Material palettes have been kept simple to achieve a restrained and functional space, where storage units and amenities integrate within a concealed joinery wall. The project seeks to experiment the daily pleasures of compact dwelling.