Save
Bouzarjomehr Office and Showroom / WHY Architects Group 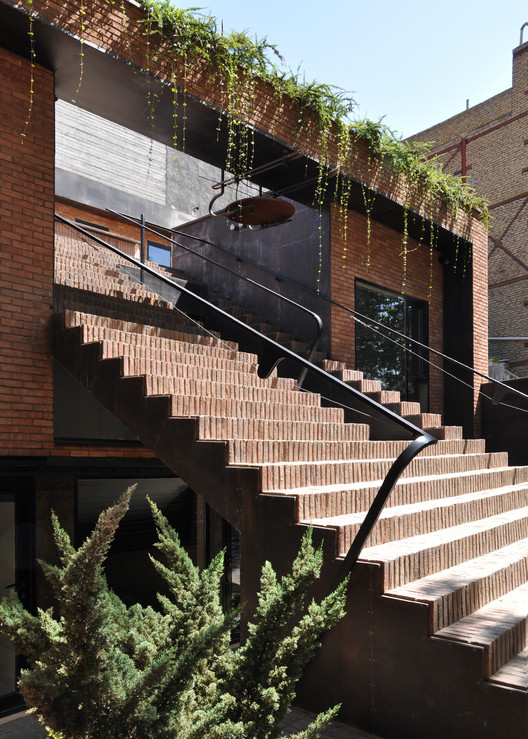 Text description provided by the architects. The decision of whether to demolish and reconstruct or to revitalize an old house, has always been a crucial one. However this choice is not exclusively within the hands of an architect. Client’s interest, cost-efficiency, context limitations and urban regulations are the structural and social factors which led the design team to the revitalizing approach the local context, through the design of an architectural object right in the heart of Mashhad.

A context in which the historical identity still has managed to survive. Such context led the design team to propose an alternative in which the collective memory of the old neighborhoods’ population, played a decisive role. So this project had to empower the neighborhood’s already devastated public space due to immethodical commercial development in the residential areas. In order to satisfy the aforementioned design approach, the team started with letting the public domain diffuse through the private and thus form a type of micro-plaza including both the sidewalk and the building’s front yard. In order to loosen the graphic boundaries even more, a certain retractable metal fencing was designed and added to the project.

The client demanded the design of a guest suit on the rooftop with an exclusive and independent access. This led to form the concept of an intentionally oversized public stairway leading to the previously abandoned rooftop of the building. The stairway became an all-around design concept that managed to link the different functions together. This in turn would provide a full upward looking viewpoint to the building which turned the not so eye-catching location of the existing building into a stop-and-spot point of view.

The second phase of the design was focused on choosing the materials and deciding on the details. The extensive use of red bricks which used to be the most prevalent and conventional material among Mashhad houses. Choosing steel sheets as the second material was also a context-based decision. The traditional cladding of all houses in Mashhad used to be galvanized iron sheets; a traditional feature that still prevails. The use of scrap metal parts in designing the details of the railings, chandeliers and the curtain fencing was also an attempt to use industrial parts as a metaphor to revitalization.