Each year, the Boston Society of Architects offers the James Templeton Kelley Prize to the best final design project for the MArch degree at the Harvard Graduate School of Design. This year, the March II recipient was Ziwei Song for their thesis titled “Not so skin deep: vernacularism in XL” for exploring alternative ways of integrating the Chinese vernacular with modern “XL” developments.

Ziwei’s thesis sought to re-approach the typical developer project in China, and demonstrate the capacity of the vernacular image to positively-effect the sequence, perception, and exposure of space. To test this, the project was placed on Chongqing, a typical second-tier city in China with a concentration of XL developer projects. 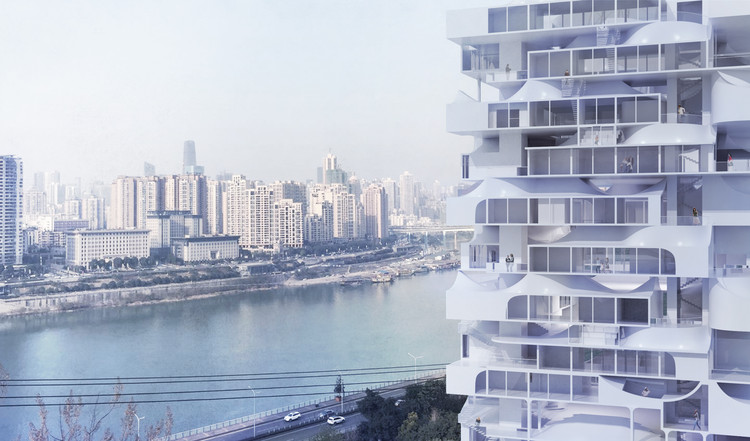 Ziwei’s critique of existing applications of the vernacular identifies “decorated sheds” which use vernacular roofs to superficially communicate a culture, or “ducks” which wrap buildings in cultural icons to distort a generic program. Both modes are not only skin-deep representations of the vernacular but skin-deep attempts to use the vernacular to create meaningful, comfortable living space. Ziwei speculated: “Isn’t there an alternative way of building XL projects that go beyond the skin-deep nature of image culture, that is woven into the experience of space?”

The resulting scheme returns to the root of cultural icons to experiment with the ability of the vernacular to choreograph space, bringing spatial richness to the XL tower typology. Ziwei translated the horizontal expansion of a traditional courtyard into the expanded exploration of vertical living, generating functional, sophisticated, exciting spaces that “simultaneously reflect the depth of cultural identity and foster distinctive urban atmospheres in China.”

The image of the scheme’s roof profiles and garden walls are associated with place and culture while also choreographing the spatial experience. The roof profile guides the observer’s view to the outer threshold while organizing the circulatory flow into different living spaces. Garden and gable walls confine neighbor boundaries to protect privacy and differentiate between singular and collective spaces.

To sustain a vernacular language across a tall scheme, Ziwei also looked to the vernacular typology of temples and guild halls, which deployed smaller units to construct a range of scales, from small private units to mid-scale social chambers and large scale civic spaces.

The final design of the tower builds both on the spatial flow of vernacular dwelling that supports flexible, adaptive living components and the viable footprint of developer tower plan. The tower alters the conventionally introverted core to four sides, freeing the central space to collective social space known as the event court. The event court houses various types of social program ranging from theater, foot court, co-working space, sports court, gallery, sculpture garden to urban forest, the key to the formation of mini-community.
-Ziwei Song

More information on Ziwei’s proposal can be found on the Harvard GSD website here.

With China's high level of exports and booming real estate market, it is predicted that the country is on its way to becoming the world leader in economic performance. As a result, the Chinese government has been taking steps to show the world its growing economy and the newfound modernity that has come with it. 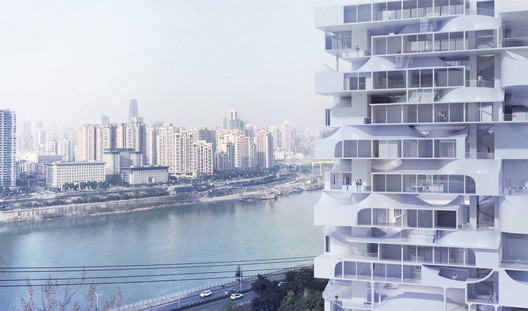