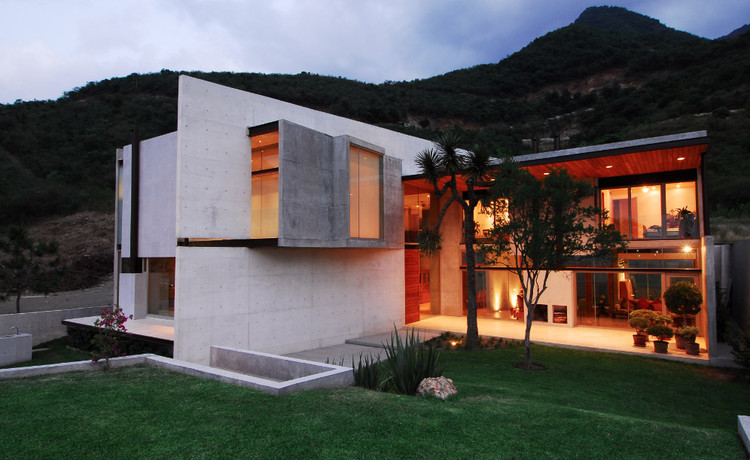 Text description provided by the architects. Bravo House is organized by two bodies that articulate through a double-height ceiling lobby that works as the house entrance, it also works as a transition space between the social and the private areas of the house. Surrounding the house there are a variety of gardens which size and proportion vary depending of the characteristics of the interior space for which they work.

The L shaped building “hugs” the main garden from the side. In the access through the garden, the Sierra Madre works as a background thanks to the view it offers. The house receives the visitors with a double-height doorway which works as a preface for the interior spaces.

The north-south orientation of the terrain site allows the house facades to open directly to the north, turning its views to Garza Garcia, Valle Oriente and Loma Larga. The south-east facade opens through a series of small-discrete windows and wall openings that frame certain views of the Sierra Madre.

The Bravo house is built in a residential development which urban image was designed with the collaboration of the same architects that worked in the Bravo project. The geographic characteristics of the residential development (framed by mountains and irregular topography), so as its urban image, were conceived to remark the natural context of the site, these were the basis of the design of the project.

The house have walls that hide and reduces spaces, these walls force the visitor to realize certain walkthroughs that reveal the richness and complexity of these spaces. This idea is based on the concept of the residential development, which consist in a series of walls that form walking and vehicular ways that create spatial sequences.

The house is located in the superior part of the terrain, so the main garden is placed in front. The access separates de house from the street creating a traverse through an open space, the garden and the doorway before the double-height ceiling lobby exposes.

The placement of the house over the terrain is achieved with platforms slightly stepped. The main facades were designed according to its orientation. TO the north they’re open, and to the east they’re closed. The floating slab and the walls work as curtains to protect the house of the east sun, leaving just some openings that allows certain views.

The house is conformed almost in its totality of exposed concrete. The use of this material enforces the sincere and definite character of the design.

The steel and crystal elements enforce the tectonic clarity of the house. These materials were used in carefully planed details and finally executed.

The wood elements of the access doorway enforce the space character of the place as one to welcome and stay. 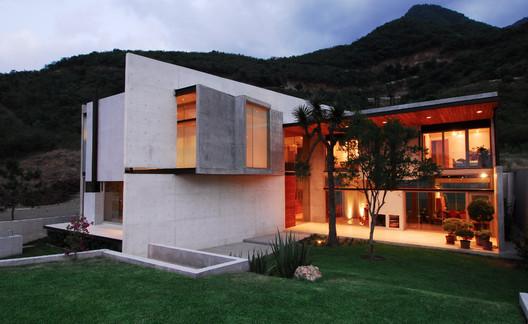